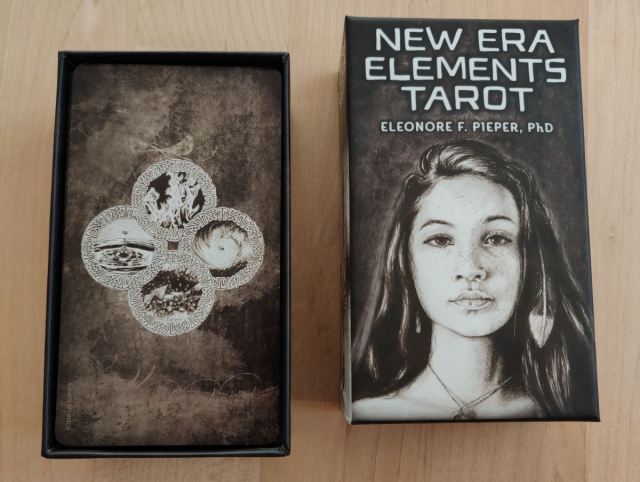 The New Era Elements Tarot by Eleonore F. Pieper is a modern deck that places the tarot archetypes in modern-day history and events.

Sepia-toned, featuring brilliantly-detailed sketch art, New Era features some of the most beautiful artwork I’ve seen on a deck. Many of the images are difficult to look at, as you’ll see in this review. 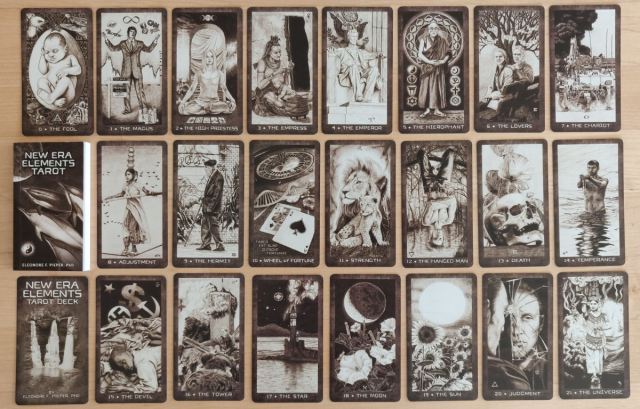 The cast of tarot characters in New Era are modern, featuring a self-portrait of the deck artist herself in Key 2: The High Priestess. Most of the human figures pictured appear modern, such as Key 6: The Lovers, Key 9: The Hermit, and the hairstyle of Key 12: The Hanged Man also placing him in modernity.

If you can, zoom into Key 14: Temperance. Depicted here is an Indian man offering water to the sun as part of his morning bathing rite. This rite has been practiced by Hindus for thousands of years as a means for marrying the element fire and the element water in a form of ritual purification or cleansing. It’s about achieving a sense of equilibrium.

Key 15: The Devil shows chaos and intentionally depicts the expression that there is no central figure of evil we can blame. There is no satanic being. Evil is what we have collectively co-created when we invoke dogmatic ideology.

My favorite part of this deck is how Pieper’s companion guidebook explains the symbolism and expression in every card. 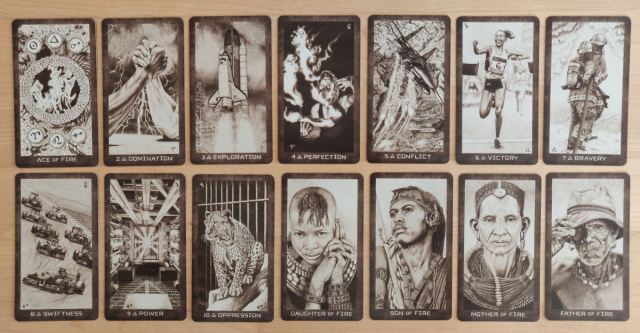 Above we have the Suit of Fire (Suit of Wands), the element of creation. The themes in these cards are willpower, individuality, and movement of life force toward new impulses. The space shuttle in the Three of Fire is off on a new journey, captioned “Exploration.” The Ten of Fire depicts a caged leopard– the imprisonment of a predatory animal. The court cards in the Suit of Fire depict people from the Maasai tribe of Nilo-Saharan origins. 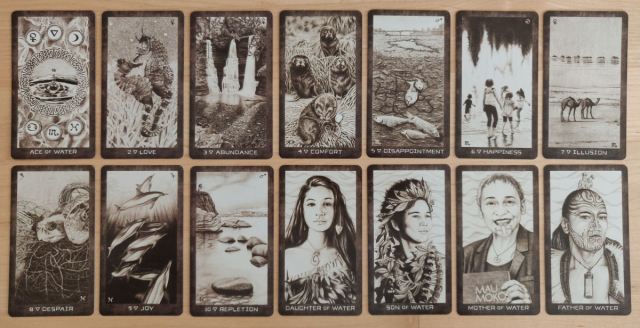 The court cards in New Era are structured after the nuclear family, rather than the traditional royal court, so for Page/Knave, you’ve got Daughter, for Knight you’ve got Son, Queen is Mother, and King is Father.

The Four of Water (Four of Cups), captioned “Comfort,” depicts four baby seal pups waiting while their mother is out hunting. The Seven of Water, captioned “Illusion,” shows the mirage of water created by heat waves in a desert. The courts in the suit of Water depict the indigenous Māori of Polynesia. 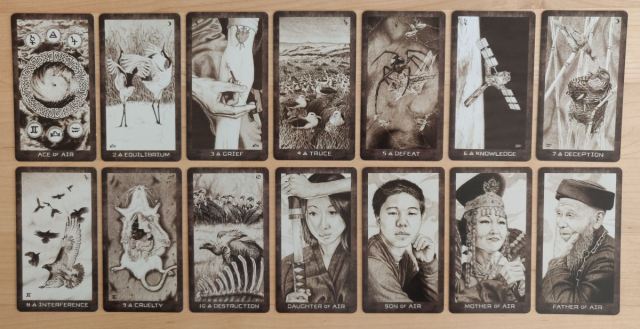 The suit of Air, associated with our consciousness, is a tough suit to look at, to face. You often hear the suit of Swords in tarot being described as the toughest of the four suits, and New Era takes it to the next level– in the most wonderful, powerful way. The Three of Air, captioned “Grief,” depicts an addict who is shooting up. The message here: we are often evading the pain of necessary grief by numbing ourselves instead of moving through the pain.

The Six of Air here, with its meanings and implications rooted more in, I would say, Thoth traditions, shows scientific exploration. The caption is “Knowledge” and we see a satellite gathering data. I love how the Seven of Air (Seven of Swords) is depicted here: “Deception”– cuckoos don’t build their own nests; instead, the female cuckoo seeks out the nest of another bird, lays her eggs in there, and the cuckoo chicks hatch before their step-siblings (and the unwitting step-bird-parent) become aware of the trick.

The Nine of Air (Nine of Swords) shows the dissection of a rodent. It’s about how we cut something apart to learn more about it and gain important scientific and medical insights for ourselves, but what’s the cost and sacrifice for that? In the suit of Air, we go East. The Daughter of Air depicts a Japanese woman; the Son and Father of Air are Chinese; the Mother of Air depicts a traditional Mongolian dancer.

Man, check out that Five of Earth (Five of Pentacles/Disks). This is a rhesus monkey captured in a science laboratory. The implication is that monkey is about to be experimented on. It shows deprivation of agency and physical safety. The Six of Earth shows six mountaineers about to reach the summit of snow-capped mountains. The Seven of Earth, captioned “Failure,” shows broken glass to symbolize entropy in our creations from states of organization to states of chaos. The courts in the suit of Earth feature portraits of Europeans.

The deck creator notes that she was inspired by both the RWS and Thoth, though maybe it’s how Pieper has tapped in to our current zeitgeist, a time in modern history that will be marked as the Trumpian Era, almost reminiscent of how Crowley and Harris tapped into the World War II era, which is when the Thoth deck was born.

The translation of the tarot archetypes into current events is done magnificently here. In a tarot market saturated with what I’d describe as more feminine decks, New Era Elements feels masculine. The deck itself feels to me like a political act.

For me, New Era is a great deck for reflection and tarot journaling. That’s why it was kind of a no-brainer to me to feature it in the second installment of my Sightsee the Tarot series, the one on self-help journaling and tarot counseling. Check it out here.

Would I use this deck in tarot readings? There’s something about New Era Elements that feels like powerful, potent low magic, what feels so intensely suffused with much of the unresolved darkness and conflicts, both outward social conflicts and inner conflicts we as a collective face right now, that it’s too close to where I am right now, too unstable for someone like me to work with in a fully controlled manner. I’m not sure I’d use it in a tarot reading for others or even for myself, but again, as a deck to inspire tarot journaling, pathworking to darker, submerged recesses, or self-reflection, it’s perfect.

FTC Disclosure: In accordance with Title 16 of the U.S. Code of Federal Regulations Part 255, “Guides Concerning Use of Endorsements and Testimonials in Advertising,” I received the New Era Elements Tarot from the publisher for prospective review. Everything I’ve said here is sincere and accurately reflects my opinion of the deck.