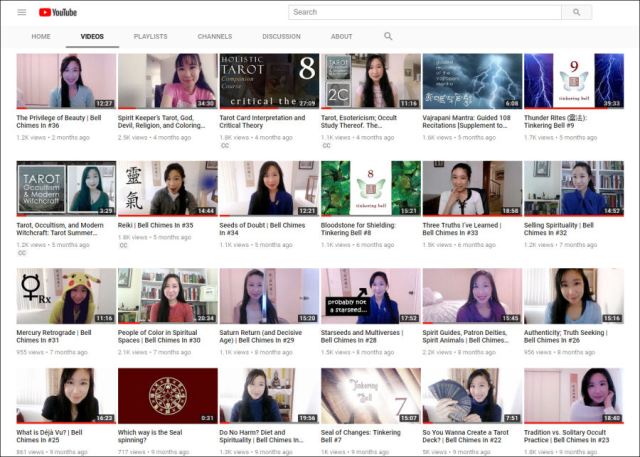 I’ve opted to blog my commentary on this issue rather than create a YouTube video and in the meantime, I’m trying to figure out for myself what I want to do going forward.

Those who follow the YouTube beauty and makeup community, or a community affectionately referred to as AuthorTube, or any other number of subsets of personalities on YouTube may have noticed that all of them seem to have one thing in common in recent times: the growing exodus of their personalities leaving YouTube and seeking out other projects, platforms, or simply choosing not to be so public and personal online anymore.

Yes, part of it is the site’s changing algorithms, but it’s a lot more than that. Few of us, especially pagan YouTubers and tarot YouTube channels did it for views or money in the first place. So the mass exodus of pagan and tarot YouTubers isn’t because of a changing algorithm. We might’ve mildly griped about it, but it wouldn’t have caused so many to altogether up and leave.

It’s the ever increasing hostility. There has been a noticeable wave of negativity washing over the comments section of YouTube videos, all across the board, and that wave has noticeably hit pagan and tarot YouTube channels.

I have caught glimpses of it on other channels and been horrified before the channel owner removed the comment or blocked the commenter. I have seen it on my own channel, some which I leave up and the nastier ones I’ll delete and block.

As a personality, you can’t even make public complaint about receiving the hostility. When you do, you’re either ungrateful to the large following of positive support you do garner or you’re thin-skinned and “can’t take the heat” so why are you posting your opinions and practices publicly?

We each hold different values, priorities, and what we are and are not willing to tolerate. It’s not the same threshold for all. There are plenty of personalities in the tarot and pagan communities who are thick-skinned enough to persist through the hostility, truly shrug it off, and keep on being public.

For me, I don’t and won’t accept that I have to do that. And clearly I am not the only one who feels that way, given how many have left. It has been sad to watch YouTube friends, one by one, up and leave, and as sad as I may be that they’re no longer creating content on YouTube, or have locked their doors and tuck everything behind Patreon, I completely understand.

Let’s talk about Patreon. Rather than leave entirely, some have opted to go on Patreon and put their best content behind closed doors, for paid viewers only, on the thought that those who are paying to view the content are going to be supportive or at the very least, when in disagreement, disagree in a friendly and civil manner.

That’s largely been true and they’re right for doing so. The Patreon community you form around your point of view and content, since it’s paid access, tends to be a lot cleaner, with less toxicity. Content creators feel rewarded for their efforts. Whereas on YouTube, the content you create and put out there, working so hard to produce it, often goes without any sense of reward.

“Going without reward” is when things are good on YouTube. Getting nasty comments is when things are normal on that platform. I can shut down my free content on that channel and turn all the videos into paid online courses and literally make about $15,000 per year for just that video course series and have everyone who is paying for the course love me for it and sending me beautiful e-mails thanking me for my work. OR: I can put it all online on YouTube totally for free, not even with AdSense turned on, and at best, be met with silence and low viewership and at worst, trolls. And that’s why this post is going up. It’s me thinking out loud. I feel like at this point, I’m the stupid one for continually opting for the latter instead of the former. I don’t want to go the route of Patreon, but what I currently have going on isn’t sustainable either.

Admittedly, negative comments are rare and far between, but when they happen, they sting you while you’re in the midst of living your life. It can completely bring down your mood. And then you can’t even openly admit that it brings down your mood because then everyone wants to know why you’re so thin-skinned or why you can’t just shrug it off. Are you not spiritually evolved enough to rise above the trolls?

As 2018 winds down and I’m thinking about my plans for 2019, I’m wondering if I should join the exodus and leave YouTube as well. Perhaps I can unlist all of my Holistic Tarot YouTube videos, for example, and simply share them as a free online course direct on my website behind a password-protected wall, so while it’s still freely accessible to those who don’t have the financial means for paid content, the added measures would detract the trolls from tagging along.

I’m wondering if it was utterly imprudent of me to make my recent series on the Spirit Keeper’s Tarot public. I quite stupidly assumed the only people who’d be interested in viewing the videos anyway are people who bought the deck and book set. And by making it public on my channel, it’d be much easier for them to access the videos anytime anywhere, whereas getting this massive e-mail in your inbox with twenty hyperlinks to videos can be confusing and hard to navigate.

What about the Bell Chimes In series? What’s the point of sharing your opinion when it’s sharing your opinion that tends to draw the most ire? Me being honest on Bell Chimes In has been more harmful to my “brand” than helpful. So you really can’t help but wonder why the hell I’d even continue it? If I can’t be uninhibited and honest, utterly unfiltered about my point of view, then there is simply no point for that series to exist. The Tinkering Bell series is disproportionately a lot more work than any rewards, tangible or even intangible, reaped.

This blog post doesn’t arrive at any definitive conclusions. I have no idea what I want to do next. I’m sharing my thoughts in real time, as I ponder them, before I’ve fully analyzed them or made any decisions. There’s a compelling reason for the mass exodus away from YouTube. Now I’m wondering if they’re the smart ones who leave town in response to a hurricane warning and I’m the idiot who is planted on my living room couch and saying nahhh— who cares about a little wind and rain? I’ll be fine. Staying put despite a hurricane warning is going to be fine.