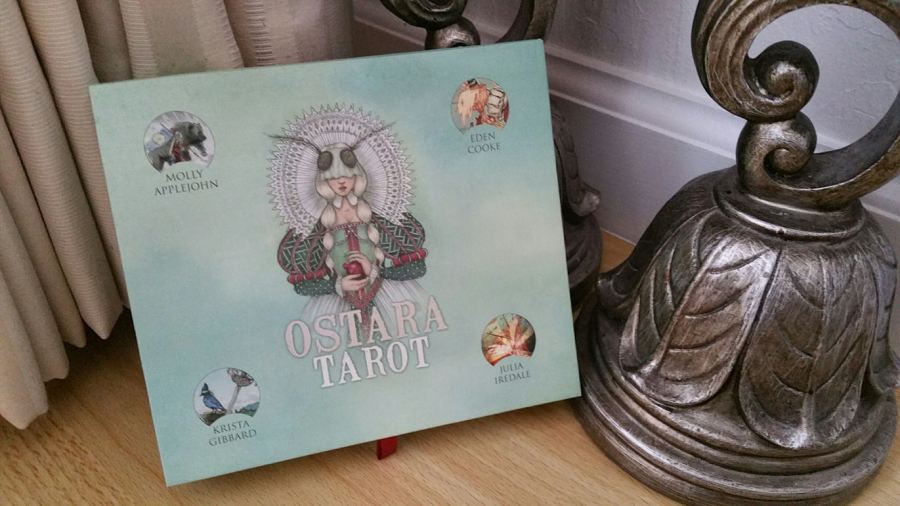 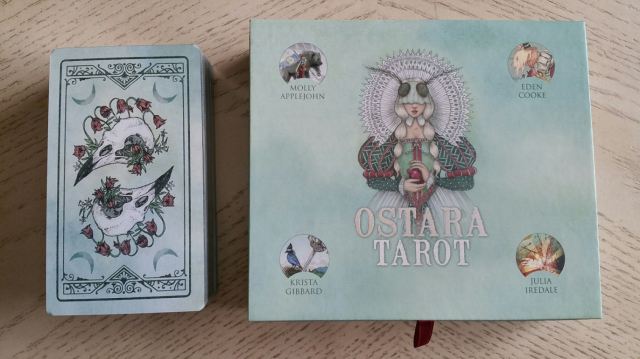 I didn’t receive my copy of Ostara Tarot until well after the spring (or vernal) equinox this 2017, but I am looking forward to taking the deck out again in March of 2018 to tap in to the equinox energies through this deck. However, really, this deck is perfect for year-round use. A case can be made that the expressions from this deck can apply to any spoke in the wheel of the year.

For me, the spring equinox is a pivotal moment in the year because my fruit trees are in blossom. Many of our flower plants are also beginning to show signs of reemerging life. It is the time of the year when my yard is a wash of pinks, purples, whites, and yellow. It’s breathtaking to see.

There is a Seven of Pentacles vibe around my place during the spring equinox. The garden work you put in the past year begins to show and you can count the blossoms to get a sense of the fruit harvest to come this summer and autumn. However, it also is a time to check yourself and remember never to count your chickens before they hatch because I’ve definitely been duped before! I think I’m about to get quite the harvest for the summer and then an icy rain kills all the blossoms overnight, or you just never know what might happen between this moment and the next sabbat.

A distinctly feminine, or soft energy comes through in the Ostara Tarot. There are depictions of male figures but you do feel a stronger leaning to the feminine. This deck is romantic. It’s a romance to nature, an homage to nature spirits.

The Majors in this deck allude to deities in various pagan or polytheistic traditions. For instance, The High Priestess is Persephone. The Empress is the earth mother archetype that you find across the many religions. The Emperor is Aires. Justice is Ma’at. The Wheel of… wait a minute. These cards are in order. Wheel isn’t after Justice…

Okay, so I don’t have a photo, but I figured out what happened. The cardstock is quite sticky when you first get the new deck and my Hermit card was stuck behind Justice. It’s too bad I don’t have a photograph of the Hermit card for you. It’s a beautiful rendering by the artist Molly Applejohn. It depicts the archetypal story of one emerging from the cave. You’ll find that story in both Eastern and Western mythologies, from Amaterasu to Elijah. In the Wheel, you see the Three Fates.

You then have the lunar and solar deities expressed in, well, what else, The Moon and The Sun cards respectively. Judgment pictures a Valkyrie. The way the stories of the Majors are told reminds me of anime, and the use of color and line are emphatically cinematic. The dark-light contrast in The Moon, for instance, where the foreground is dark (rather than light) and the background is light (rather than dark) is an incredible use of both color symbolism, cinematography, and theatrical storytelling through art. 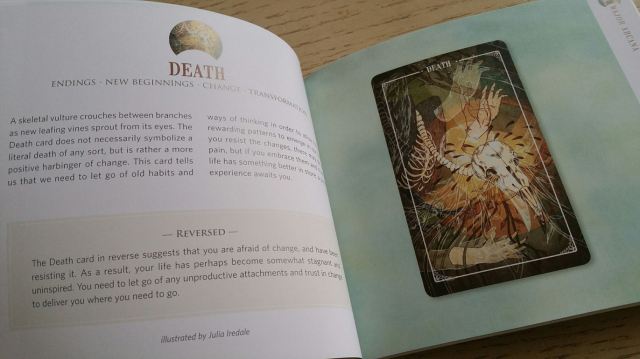 The Guidebook that accompanies the deck is great at explaining the artist intentions for each card and attributing the artist to the artwork. Each Major has its own page spread. The Guidebook is in full color, which is beautiful. You get the full depiction of the card in color on one side, then keywords, a block of text about the card meaning, which includes the artist intentions and a description of what the card imagery is depicting. There is also a shaded entry at the bottom for the card’s reversed meaning.

The Minors are featured on one page each, but once again, the content is comprehensive. You can extract a lot about each card and the artist’s intentions through the entries from the accompanying Guidebook, which simply goes to say that this is a very good LWB.

By the way, this deck is the collaborative effort of four artists, Molly Applejohn, Eden Cooke, Krista Gibbard, and Julia Iredale. The four clearly have a simpatico relationship with each other  because they’ve stitched this deck together seamlessly.

Pictured above, the suit of Wands was illustrated by Julia Iredale, a Canadian artist which a surrealistic and whimsical point of view. Here you see strong reliance on a print block style, with the detailing rendered in the white lines.

The suit of Coins, as the suit is called in this deck, was illustrated by Molly Applejohn. According to the artist biographies at the back of the Guidebook, Applejohn initiated the Ostara Tarot project. Her art is storytelling, often depicting myth and historical fiction. You really see the storytelling style come through here in the Coins. The figures are immersed in activity within the card imagery and aren’t necessarily including the onlooker, meaning you don’t get that effect of merger between you, the onlooker, and the figure in the card.

The suit of Cups is illustrated by Eden Cooke. Her art style is more homogenously Western influenced, as compared, for instance, to either Applejohn or Gibbard.  In the photo above you’ll see how when I set out the cards, I left a blank because I couldn’t find the Five of Cups. At first I thought my copy of the deck was missing the Five of Cups.

Then I found it…stuck to the Four of Cups. You’ll see that both the top left corner of the Five of Cups and even the corners of many of the cards in these photographs are a bit worn or creased. That’s my fault…because so many of them were stuck together and it was very difficult to un-stick them.

I think the deck will really need to be worn in a bit before they are fully readable as a divinatory tool. When I shuffle, the cards tend to stick to each other, so I don’t get a really good shuffle unless I’m working at it hard, which can break my concentration at times. The finish on the cards are also high-gloss, and I mean super glossy. If I look directly into the card under the light, I can see my own reflection. That glossy. The high-gloss finish renders the deck difficult to shuffle. Plus, altogether, it’s a thick deck, so cumbersome in the hands. Matte, with a more shuffle-friendly cardstock quality would have made this deck one of my go-to professional reading decks. I love the imagery and intuitive sentiments that much. However, with the tragic gloss finish and unwieldy cardstock, it’s just not a deck I find useable. So for me, it’s better as a collectable.

Moving on to the suit of Swords, probably my favorite in the deck, you get the works of Krista Gibbard. Gibbard has a more realistic style of illustration. Look at the labor-intensive detailing in the grass and path for the Two of Swords, the edtchings in the tree for the Three of Swords, or the ripples in the water for the Six of Swords. The style here is methodical and precise, which is perfect for the energies of the suit of Swords! 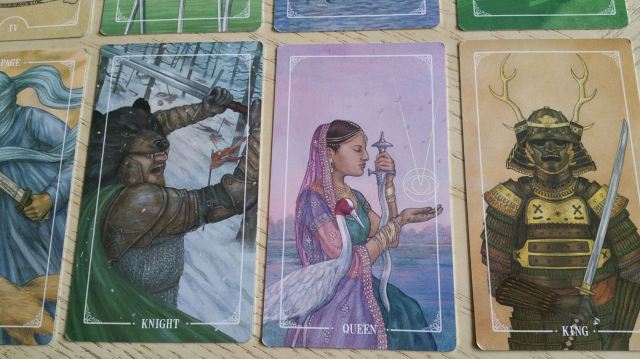 Here’s a close-up of the Queen of Swords, one of my favorite cards in the deck. While the Majors in Ostara Tarot focus on deities and mythology for inspiration, the Minors employ animal guides. The idea here in the Minors was to bring forth the voice of animal spirits. I love that. And I hear it. It’s done quite effectively here in the deck so if you work with animal spirits, Ostara is a great deck to have in your arsenal.

The edging on the cards is a metallic silver, which I just love. I really love that deck creators and publishers now are including gilded edges. It makes such a difference. I also love the card back design here, with the bird skull and the flowers growing out of the skull–the cycle of life and death. You’ve got crescent moons on the four corners and just beautiful detailing through pen and ink along the border. The card back is also reversible, so you can read with reversals, which is what I do with this deck. 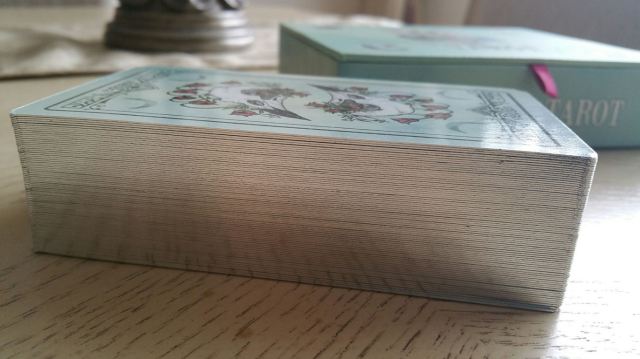 The deck is really thick, so that’s something to be mindful of. For me, it was a pretty difficult deck to shuffle with. Again, I couldn’t seem to get a good shuffle going. Chunks of the deck would just stick to each other and I couldn’t unstick them, or during a divination, would have to kind of “check out” of my divinatory mental space to do the practical deed of un-sticking the cards.

Edit: So here’s a funny story. I started my draft for this deck review earlier in the summer, in July, at the peak of hot weather where I live. I’m talking muggy, sweaty, shorts and tank top, high ponytail type weather. And my Ostara Tarot cards were just sticking to each other like nobody’s business. Hence the commentary to that regard in the review. However, I didn’t finish the review, meaning I waited for more time to connect and work with the cards, until late summer, when the weather here has cooled dramatically. Now the cards no longer stick to each other. At all. And I shuffle the cards just fine. So it looks like the particular finish and gloss on these cards render it fine for cooler weather use but are going to be kind of cumbersome in the hot, humid summers… Interesting.

The Ostara Tarot by Applejohn, Cooke, Iredale, and Gibbard empowers a diviner’s relationship with nature. We manifest power through Heaven and Earth, and how the deck creators have navigated the Majors and Minors fully expresses that philosophy of nature magic. The Ostara Tarot is about paying homage to the natural world. Idyllic, whimsical, and tender, the Ostara Tarot is a pagan-themed deck that connects you to god archetypes and animal spirits. Inspirational and picturesque.

FTC Disclosure: In accordance with Title 16 of the U.S. Code of Federal Regulations Part 255, “Guides Concerning Use of Endorsements and Testimonials in Advertising,” I received the Ostara Tarot from the publisher for prospective review. Everything I’ve said here is sincere and accurately reflects my opinion of the deck.

8 thoughts on “The Ostara Tarot: A Beautiful Deck for Year-Round Use”