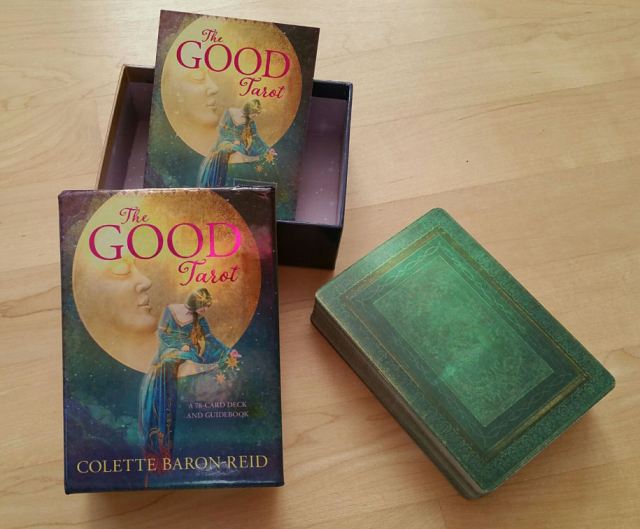 The artwork in this deck is mesmerizing, I love the emerald card back design, and the deck is a resplendent addition to the genre of New Age Aquarian consciousness tarot decks targeted for the mainstream Indigo Crystal child that has risen in popularity this last decade. 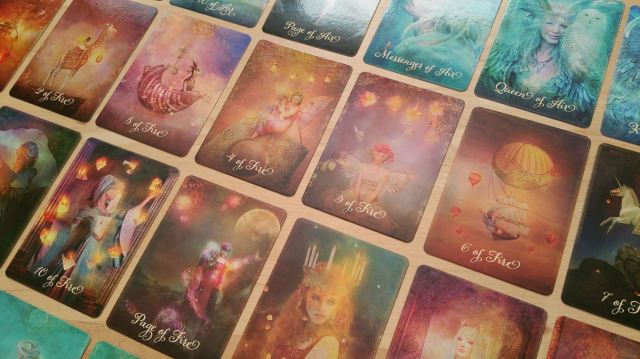 The soft-focus, ethereal point of view superimposed over the classic tarot architecture is an intriguing premise. I would consider this deck to be kid-friendly. Heck, tarot reading parents can totally use this deck to improvise bedtime stories. (That would be a really cool idea actually, especially with The Good Tarot, which is rich with magical creatures, the fairy tale ethos, and the promise of a happily ever after.)

The premise of the Good Tarot suggests a tinge of rivalry with the Doreen Virtue tarot premise, which is the attempt to cast a spiritually protective net over the tarot by eliminating any window of negative energies to come through and to eradicate “scary” cards that might otherwise be triggering to those of softer dispositions. Even if there is no intent to compete, Baron-Reid and Virtue certainly appeal to the same target market. 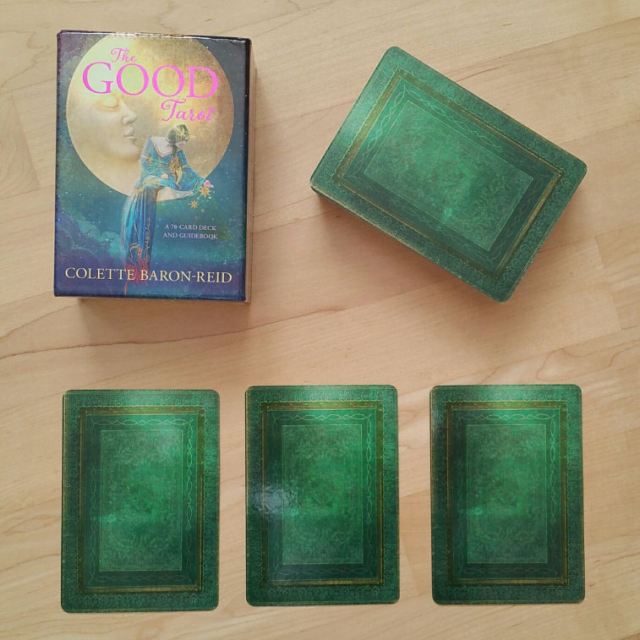 Let’s start by seeing how well you connect with these cards. From the above photo, choose one of those three cards– left, center, or right. We’ll circle back to this later and I’ll reveal which card you drew.

If you feel spiritually connected to angels, fairies, and mystical fantasy lands with fairy tale endings, you are going to love this deck. This deck transports you to another dimensional realm, one where magic looks a lot like the magic you see on TV. The lion imagery in the Empress, lion plus woman in embrace in Key 6: The Lovers, and lion plus woman again in Key 8: Strength tripped me up a bit, but if you commit to working with this deck, you get over that rather quickly.

Reading The Good Tarot will be less about occult symbolism and more about feeling out the general energies around a situation. For me personally, I couldn’t get precise readings with the deck, though it performed exemplary for tapping into overall energies. The artwork is dreamy, imaginative, and soft. The deck name is apropos, because when I gaze at the card images, I smile wistfully and feel… good. The entire deck unfolds like an adolescent girl’s day dream.

I appreciate the color scheme for each suit and the cohesive patterns maintained. The Good Tarot is going to read like its own independent and modern system. It’s not a Rider-Waite-Smith clone, it’s not a Marseille deck, and it’s definitely not a Thoth. If you scan across the top row above, 2 of Air to Six of Air, then even continuing on from 8 of Air to 10 of Air, I confess that as a reader I would have a difficult time parsing through the cards and distinguishing each separately for independent symbolism. The energy of 3 of Air feels similar to, say, 10 of Air, which I suppose makes sense. Three of Swords and Ten of Swords do share some similar vibes.

The suit of Fire is delightful. Unicorns, pretty maidens, and floating golden orbs. If you write young adult fantasy fiction for girls, this would be a great deck for triggering your creativity.

I’m going to skip the Suit of Water skip for now and revisit it later.

Here we see the suit of Earth and it conveys strong earth tones. Here we see iconic coin imagery. I love the musical instrument symbolism for the 8 of Earth (Eight of Pentacles).

Now let’s talk about the suit of Water.

Again, color scheme reflects the element. We are now entering a fantasy world under the seas. The blue-green-aquamarine hues here are beautiful and just so, so pretty. The deck could have been called The Pretty Tarot.

There is one card in the suit of Water, to me, that is not like the others. And that’s the 10 of Water. Let’s talk about the use of Buddha here.

Use of Buddha imagery for the Ten of Water here echoes the allegations of cultural appropriation that singer-songwriter Katy Perry was under fire for recently. Just to be clear: I don’t mind and I don’t think this is an issue. This isn’t a thing. People are blowing the cultural appropriation claims out of proportion. Here’s what happened to the singer. Perry had posted an image of Kali on her Instagram with the caption “current mood.” You can read more about the controversy it sparked at EliteDaily here, PaperMag here, TeenVogue here, Internet Hindu: Voice of Hindus here, and UK’s Evening Standard here.

In terms of the subdivision between the Majors and Minors that tarotists classically understand, with Majors tending to relate to the collective unconscious, spiritual journey, blah blah blah and Minors tending to relate to the mundane everyday (and then you decidedly stick a Buddha in the Minors…), plus not being specifically an Eastern spirituality themed deck, plus the specific contextual use of the Buddha imagery here, which I will get more into, may conceivably be construed as insensitive or tone deaf. It’s not a big deal, don’t get me wrong. It’s a “whatevs” moment, but one I’m still going to point out. 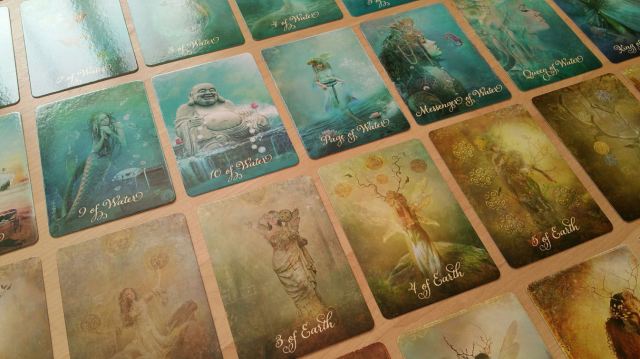 Using Buddha imagery in a tarot deck is not “cultural appropriation” or “tone deaf” or to be discouraged, but rather, you have to consider how you’re using it and the context. Here, in the Good Tarot, I felt like Buddha was being somewhat fetishized alongside seahorses, fishies, and mermaids. If you scan the line of cards for the suit of Water, the narrative of a seahorse, then fish, merfolk, maidens, and mythical European-inspired ocean spirits, the Buddha appears out of place. As a deck creator and spiritualist, why is a Chinese Buddha (the depiction of Budai here is Chinese in style) there for the Ten of Water? Perhaps it’s my ignorance, but the more I scan the narrative of the Water suit, the more perplexed I get.

Again I’d like to emphasize: is this a big deal? No. Not at all. Is it weird? Uh, yah. A bit. Buddha was out of place among the European fairytale depictions of merfolk. As a tarotist, you’d have to ask the deck creator: what is the symbolic significance of depicting Buddha here?

All right. Now back to those 3 cards. Do you remember which you chose? Left, center, or right? Here they are:

I do love the accompanying guidebook. I’m showing snapshots of each relevant page from the guidebook corresponding with the above three cards. 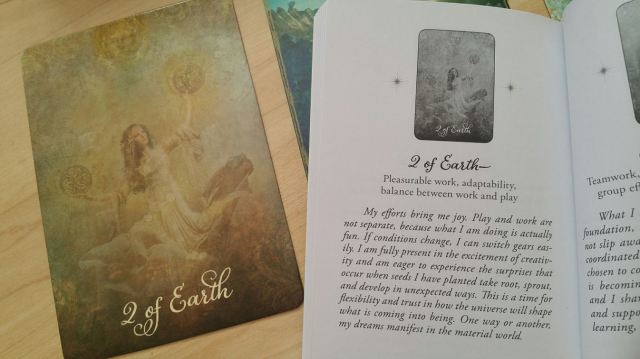 If you chose the 2 of Earth, you can read the entry from the guidebook, provided above. It echoes most common interpretations of the Two of Pentacles. 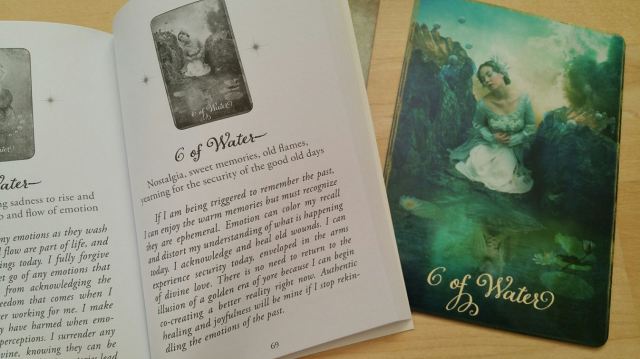 The center card was the 6 of Water. Again, the interpretation from the guidebook echoes traditional card meanings for the Six of Cups. 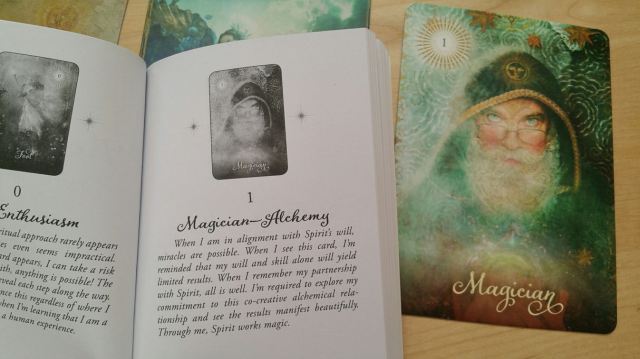 Finally, if you chose the card on the right, you got Key 1: The Magician.

The Good Tarot is a wistful, whimsical tarot deck that depicts a utopian fantasy world of fairies, mermaids, angels, unicorns, white-bearded Merlin-esque wizards, and Buddha. There is a quixotic essence to the deck that is going to appeal to a large audience. The 21st-century-New-Age Qi is strong here.

I do get the distinct sense that The Good Tarot is trying to compete against the Doreen Virtue empire, though, which is great, by the way. The more the merrier. We don’t have enough safe tarot decks. There is nothing wrong with choosing skim milk, or buying the fat free cookies, or drinking diet soda. Personally, I’ve always been a full fat, real sugar kind of gal. I believe I have intentionally had margarine or “butter spread” once in my lifetime and then never again. It’s the real butter for me, thanks.

If we make the inevitable comparison between Baron-Reid’s The Good Tarot and Doreen Virtue’s Fairy Tarot, I prefer The Good Tarot, though the two are distinctly different. Baron-Reid’s deck will rely more on your own creativity and intuition, whereas the Fairy Tarot had divinatory captions. 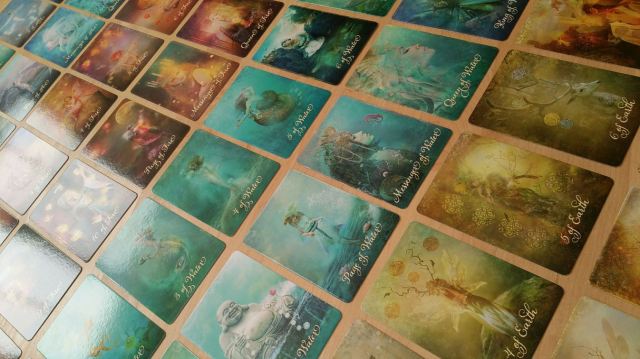 The self-identified empaths with more sensitive dispositions are going to love The Good Tarot. It’s got strong Cancer-Pisces vibes. The Good Tarot doesn’t work for me as a reading deck mainly because I’m a closed-minded snob who, when it comes to the occult, probably spouts conservative values. However, I love that we have availed to us a deck like The Good Tarot, adding to the diversity of the tarot world. This deck will open doors. Baron-Reid’s work helps introduce tarot to a much wider audience and I dig that.

It’s a great deck for lay folk who would like to tinker around with a tarot deck once in a while. The companion guidebook is comprehensive and adequate for helping anyone no matter the level of tarot experience navigate a reading. So as a deck set, The Good Tarot would be an excellent gift for any yoga-loving, free-spirited, love-and-light friend in your social circle.