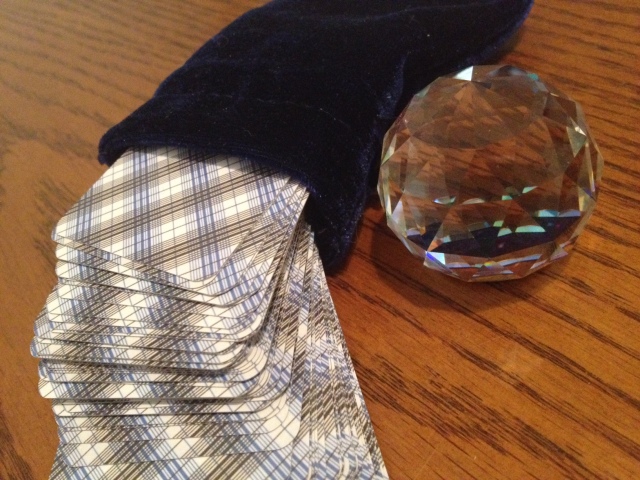 I am preaching to the choir when I write this to an audience of tarot practitioners: If your personal energy could be quantified like battery life, then reading tarot for others will drain it like streaming a movie on your smartphone over 4G connection. Reading tarot depletes me in a way I cannot fully convey. Sometimes I get the sense that non-tarot practitioners who request tarot readings from me don’t have any idea.

On its face, a tarot reading seems to be an effortless dealing of a deck of cards, and then blurting phrases based in some part on the card imagery. What could be so hard about that?

Tarot is a tool, a metaphysical one if you will, that connects two individuals’ energetic fields together for the duration of a reading. The nature of the relationship between practitioner and seeker is that of give and take, respectively. A practitioner feels his or her energy draining out and going into the cards to provide the reading that the seeker is receiving. Seekers often talk about readings being rejuvenating, cathartic, an enriching experience. They’re picking up on that channeling effect. In contrast, tarot readers talk about feeling exhausted, needing to recharge.

Very few tarot readers make enough cash from their readings to compensate for their time spent. That, though, we will chalk up to simple economics and just acknowledge that at least from a free market standpoint, that part is fair.

I draft business contracts for a living and almost every one of them contains an indemnification clause. Indemnification is often one of the main points of negotiation and contention between the parties. In the course of a commercial dealing, some poo always makes its way to the fan– costs of damage resulting from the initial transaction that weren’t accounted for in the contract price– and everybody needs to figure out who owes what to who and how much to compensate for the loss. That’s indemnification.

When I make reference to the unindemnified price of tarot readings, I’m talking about that energetic loss that tarot practitioners sustain but no one accounts for, or heck, even acknowledge. Some seekers can be borderline parasitic, though I believe never intentionally so. Most tarot practitioners are by nature empaths and so of course their first inclination will be to yield and give and feel.

As an empath with a law degree, when I first started my legal career, I felt every client’s problem and took home a briefcase of emotional baggage every night. I’d think about their issues in the shower, while brushing my teeth, before I fell asleep, the first thing when I woke up, while I made my coffee… Yet senior partners at the firm seemed to master such control. They compartmentalized. One might be tempted to say they were apathetic, that they were desensitized, or they did not care. That is not true at all. They cared and they cared deeply about their clients. But they have been at this a long time and they know that to truly be in a position to help as many as possible, they needed to take care of themselves first. Selfishness is a form of selflessness. They knew exactly when it was time to step away from a case, recharge themselves, and live their own lives for a change, instead of living for others, which is exactly what lawyers do, though they rarely get seen by that side of them.

Tarot practitioners must take a cue from these partners. Newbies rarely possess the prudence to know when they must step away and focus on themselves. They get caught up in the exhilaration of uplifting others–an admirable trait–but ironically (since we are tarot readers…) fail to foresee the pending crash. That is why burn-out is such a problem among startup tarot practitioners.

There is no indemnification for that spiritual energy drain that is part of the tarot reader’s work. Thus we are the ones who must keep ourselves in check. Always take time to recharge and learn to say “no.”

2 thoughts on “The Unindemnified Cost of Tarot Reading”