The above video is old, uploaded several years back, but I came across it yesterday and the news is certainly relevant to this day: alleged psychics who use tarot and other arts to scam people of money. This news broadcast is about scams near my neck of the woods, the Bay Area in California.

When driving downtown, you do see many glass window neon sign “psychic” fortune-telling shops like the ones depicted in the broadcast. People like the alleged psychic tarot reader interviewed in the broadcast cause me to shudder with disgust.

In every professional field, there are the scam artists, the cons, the good-for-nothing bottom-feeding scum of the profession that will rob you of your money and not provide any quality services in return. Lawyers (we definitely get a bad rep for that), doctors even, plastic surgeons especially, accountants, every profession. However, such professionals are still taken quite seriously by the public at large because of overall strict regulation and licensure requirements. At the end of the day, as long as you the consumer do your due diligence, the likelihood of getting scammed by one of these professionals can be diminished greatly. In tarot reading, not so much, because there are no regulatory or licensing requirements, no schooling minimums you’re expected to meet before you can hang out a neon sign and call yourself a Tarot Reader.

To start, I cannot believe the scam-artist Tarot Reader in the broadcast declared that he was 99.99% accurate. Who does that? Ethical lawyers, no matter how skilled or experienced, would never tell you that you are 99.99% likely to win (or lose). They may say you have a strong, compelling case, but then will always follow that up with a caveat: prepare a contingency for the ever fickle winds of change. The strongest cases can fall apart at the eleventh hour, and the weakest cases with no rational chance of victory can prevail. Tarot readers could do well to give such advice to their clients, especially since such a philosophy couldn’t apply more pertinently to an art like tarot reading.

Next, according to the broadcast, the decoy asked about her husband’s colon cancer. Per the American Tarot Association’s guidelines, there are two red flags right there. First, do not do readings to diagnose a health condition. You can read about how one might go about coping with what’s happening, but do not diagnose. Second, do not read for third parties. The practitioner can rephrase the question for the decoy and have her ask about her role in supporting her husband right now, but she shouldn’t be asking on behalf of the husband, not unless he’s present and consenting.

Then, as a tarot practitioner who also uses the Rider-Waite-Smith system, the next part interested me greatly. I will say that chances are the producers, who probably don’t know much about tarot, reenacted the tarot reading being referenced just for cool footage, but if it is based on the actual reading the scam-artist Tarot Reader gave to the decoy, it will make any RWS reader scratch his or her head. 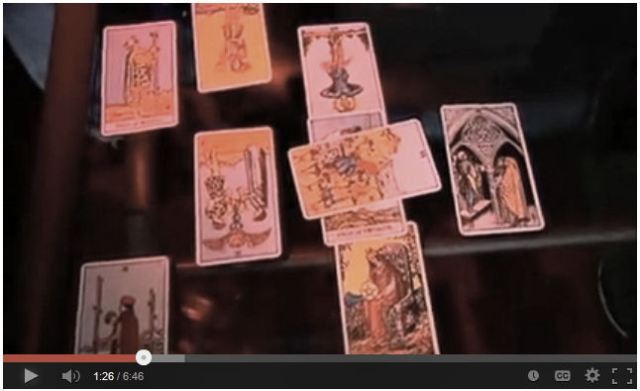 The above are screen shots taken from the footage of the broadcast. It looks like a slight variation from the Celtic Cross. Now. Whether you are reading it from the vantage point of where the tarot practitioner is sitting or from where the client is sitting, or whether you observe card reversals, I can’t for the life of me stretch my interpretation of these particular RWS cards enough to reach the conclusion that the scam-artist Tarot Reader ultimately reached: “It’s not cancer. It’s a spiritual sickness sent his way, and it’s curable.”

There are tons of court cards in the spread. If anything I would suggest turning to loved ones for moral support and guidance through this time of great need. Considering the 3 Pages, that support is likely to come from children or the young. The Two of Cups might also suggest that the relationship between husband and wife will become more like best friends as they lean heavily on one another’s strength and get each other through the crisis. Had the illness been an indication of a greater spiritual path, I reckon there would have been a dominance of Major Arcana cards. Here, there’s 2.

In 2011 Anderson Cooper did a great segment on Gypsy Psychic frauds that’s worth checking out. You can find clips of it online.

You can also find dozens of blog posts from other tarot practitioners who have weighed in on the issue with their opinions. In the Anderson Cooper segment, two women were defrauded of hundreds of thousands of dollars. As a result, some practitioners imply blame on the clients: how could you fall for such an obvious scam? You see that same sentiment echoed through much of the commentary on psychic frauds.

It reminds me of the way society blames the woman who has been raped for being raped. She shouldn’t have been there, doing this, dressed like that, at that late hour, alone. Therefore, it’s partially her fault these men thought it was okay to violate her. Really? It’s her fault that there are evil people in this world? It’s these fortunetelling victims’ fault that there are sinners with the spiritual audacity of defrauding the innocent of their hard-earned money?

It isn’t their fault at all. The purpose of civilization is a tacit mutual agreement that we will all abide by certain codes of conduct so that we can all live together in peace, so that we can each enjoy our autonomy without getting harmed by others. When that fails to keep one from harm, it is society that has failed the victim and the perpetrator and the perpetrator alone who should be punished.

These charlatans are pure evil, not because they are defrauding people of money, since frankly speaking the bolder ones of all professions do that, but they are pure evil because of their spiritual audacity: the audacity to screw with someone’s faith-based understanding of the universe, an act that is more abhorrent than other frauds because, truly, anyone can fall for it. Let me cite an example.

Hubby is a highly educated professional and atheist. That’s right: through and through atheist. Forget the psychics and mediums– he thinks even what I do is hokey pokey. When we’re house hunting and I say “feng shui,” he rolls his eyes. He refuses to let me do a tarot reading on him because he thinks it’s crap. He thinks horoscopes and astrology is crap. When my mother said she needed to consult the dates and years and the phases of the moon to determine the most auspicious date for our wedding, he really rolled his eyes.

Yet while traveling near Tibet one time, a street charlatan stopped him and asked him to buy some lucky charms. He declined and tried to walk on. She hounded him and he continued to try to brush her off. Then she said, “What is it, you don’t care if bad things happen to your mother? Her health is failing and it will continue to fail. Just buy one lucky charm for $10 and she will be fine.”

Obviously he should have given that person the middle finger and walked on. But his mother is a sensitive topic for him because her health is failing and she is very ill. To curse or even threaten to curse his mother’s health is quite possibly the most fucked up thing you could say to him. And $10? What’s $10 to him? He’s lost 10x more than that betting on the wrong sports team before. So. He forked over the $10, bought the damn charm, and didn’t even end up giving it to his mother because afterward he felt like such an idiot.

The charlatan had no special psychic powers. Observing the age of my husband, chances are his mother is old and any elderly woman is going to be experiencing health problems. The extent of manipulation by these types is the worst of the manipulation lot because they strike people at their most vulnerable.

Anyway, so sorry for digressing. My point here is, yeah, tarot practice should be regulated, and heavily so. Its risk of injury to people, and the worst kind of injury–spiritual injury–is so profound that not regulating it is in effect allowing some of the most evil people in the world to run amuck in civil society.

7 thoughts on “Tarot or Psychic Scams: Why Tarot Practice Should Be Regulated”