The New Age spiritual movement as it manifests in 2015 and 2016, the years of publication for the Starchild Tarot, embraces the importance of developing personal intuition through cards, like tarot. Decks like the Starchild have introduced a new generation and new class of tarot readers that didn’t exist before. Starchild is one of those decks that makes tarot more accessible to mainstream Millennials. While timeless and other-worldly in its vision, the Starchild Tarot manages to also be very much about the “now,” and the present.

I have both the first edition Starchild Tarot, which I reviewed here back in June of 2015 and now the latest 2016 Starchild Tarot Akashic Edition, which I love even more than the first. As of this posting, the Akashic Edition is sold out, so you’ll have to contact the artist and creator, Danielle Noel directly to see if there is a pre-order option or waitlist for the next edition.

The tarot blogosphere has been gushing over the Akashic Edition and I am a little late to the party (as usual). I figure I’ll use my review time to compare the two editions. 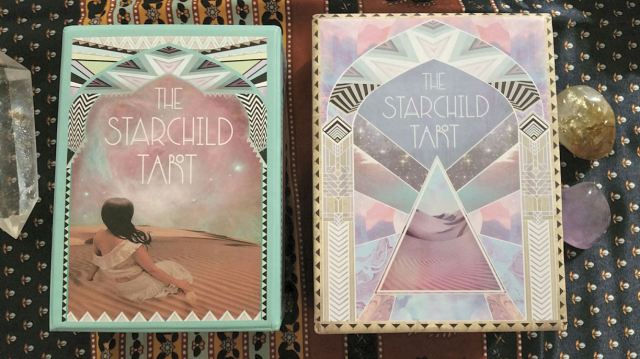 On the left is the first edition and on the right the Akashic edition. You can see from the above photograph that the Akashic is just a sidge larger than the original. I’m also loving the new box design. Both boxes are of amazing quality. 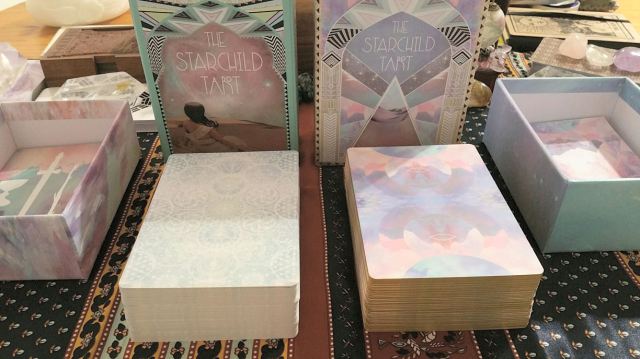 Noel’s signature style comes through in both. We talked about the card backs from the original edition in my last review, which feels more mathematical than the new card back design. Here, hmm… I’m actually thinking I prefer the original card backs! But it’s an entirely subjective judgment call.

The coloring for the Akashic Edition has been muted, giving the design a more “ascended” feel… if a design could be ascended. I do prefer the new cover to the companion guidebook over the original cover.

END_OF_DOCUMENT_TOKEN_TO_BE_REPLACED

I would say this is the dark or shadow side of professional tarot practice. To not face it, to intentionally withhold it from public scrutiny is to practice tarot with your head buried in the sand or worse yet, to intentionally misrepresent what happens or could happen in professional tarot. Everything here makes me uncomfortable. It makes me squirm. It makes me feel icky. I loathe that any little part of my personal tarot practice– always unintentionally– mirrors anything I’m about to address in this post (or in the downloadable PDF I’m providing).

END_OF_DOCUMENT_TOKEN_TO_BE_REPLACED

The Starchild Tarot is a self-published deck by the Canadian-based Danielle Noel, with the first printing released in 2014. The artwork for the deck is photography and digital collage with some illustration in a light, muted color palette. It’s surreal, symbolist, and yet blends those artistlc styles with portrait photography.

The deck is pastel in hues, dominating mostly in light blue, pinks, and purples. The style of the art and how Noel has pieced this deck together conveys the sense that each card is a gateway to an other-worldly dimension. Use of this deck for meditation or pathworking would be ideal.

The cards are a beautiful matte finish (love!!), thick, sturdy, larger in size that typical tarot decks, i.e., 3.375″ x 5.0″, and have white borders that I think work very well for the deck. I really love the font that Noel used for the card titles!

The deck is inspired by the New Age concept of star people, or star seeds. Brad Steiger, a paranormal author, introduced the idea of star people, humans who have extraterrestrial genes in them (maybe? I might be butchering this idea, in which case my apologies) and are an alien race born into human bodies to serve humanity through a higher spiritual purpose. Under Steiger’s concept, star seeds are more psychic or intuitive than ordinary humans. That’s as much as I’ve read on the topic and I don’t even know if it’s accurate. But it’s an interesting spiritual theory and I began my thoughts on the Starchild Tarot within the star people/star seed context.

END_OF_DOCUMENT_TOKEN_TO_BE_REPLACED

A Sea of Calm is a self-published 52-card mandala oracle deck by Fiona Stolze. I got a deck from the second printing and just love the artwork. In true contemporary oracle deck form, each card features a keyword or phrase, which can be applied to the divinatory exercise at hand. The deck has a calming, soft energy with exquisite mandala art by Stolze. These are paintings on silk printed onto borderless cards with captions like “Embracing the Divine Feminine,” “Thy Will Be Done,” or “Synthesis.”

The cards are a good fit in my hands, at 2.75″ x 4.75″ and altogether make for a rather slim deck, so it transports easily alongside a tarot deck. The deck description on Stolze’s website notes that the deck is ideal for meditation and contemplation.

Mandalas are, in a nutshell, an art form intended to express the artist’s perspective of the universe, or a certain part of the universe. Religiously, they’re used to help establish sacred space. Thus, an oracle deck of mandala art would be ideal for practitioners who use tarot or oracle decks in meditation. I’d imagine they’d work pretty well, too, for work on the astral plane.

END_OF_DOCUMENT_TOKEN_TO_BE_REPLACED

I came across this video clip on the interwebs. It seems to be from one of those rational skeptic shows, one called “The Bulls**t Detective” (Series 1, Episode 4), meant to debunk “pseudoscience and . . . new age nonsense.” By the accent of the show’s host, Alasdair Jeffery, I’m assuming it hails from the UK. Not so sure of the language of the subtitles. If you’re a tarot reader, I strongly recommend that you watch this and, I hope, read my assessment of it below.

END_OF_DOCUMENT_TOKEN_TO_BE_REPLACED

Left image of pagan Wheel of the Year from Biblical Connection.

I don’t have educational degrees that would qualify me to write about any of this, so please understand that I am writing my observations within that non-expert context. Lately I’ve been fascinated with pagan and neopagan belief systems, mostly for how strikingly similar paganism is to Chinese Taoist-based folk religion.

Here’s how I understand paganism in context: Back in the day across Europe, Abrahamic religions rose to dominance, became institutionalized, and began setting up centralized bodies of authority that often started in the cities and spread its influence from there. At the fringes of the countryside, however, pagan faiths endured among the minority. These pagan faiths were polytheistic, though pantheist, strongly nature-based, and because they believed that everything was connected, it was thought that certain herbs, incantations of words, ritualistic conduct, and representations of elements could be harnessed to manifest intentions–in other words, magic exists.