So I’m driving to work in the morning stuck in a rush hour traffic jam. My car is effectively parked on the freeway and I’m running late for a meeting. I mutter obscenities and am freaking out about whether I’ll make it to my meeting on time. Just then my finger inadvertently pushes the change-radio-station button on my car steering wheel and it’s Avril Lavigne’s “Complicated,” or a snippet of it.

Chill out, whatcha yellin’ for?

That’s all I hear before I hit the change-station button again and I catch the start of my current #1 favorite song, Enrique Inglesias – “Bailando.”

I’m happy now. Super happy. Because “Bailando” makes me happy. Also it’s not easy to catch the start of a song you like off the radio. You always land on it mid-way through or near the end. This time, I got to hear “Bailando” in the entirety. A gift from the Universe.

That wasn’t the first time stuff streaming out from the radio made sense with what was going on with me in the moment. I gave a shallow example, but it was the most recent. Other times much more serious stuff was going on when randomized snippets of songs from the radio didn’t seem so random and played just when they needed to be played.

The other day an author, psychologist, and acclaimed academic had on the signature line of his e-mail the following quote: “Coincidence is God’s way of remaining anonymous.” ― Albert Einstein.

Not that I’m saying God has nothing better to do than to talk to me through the lyrics of pop music playing on radio stations. But still. 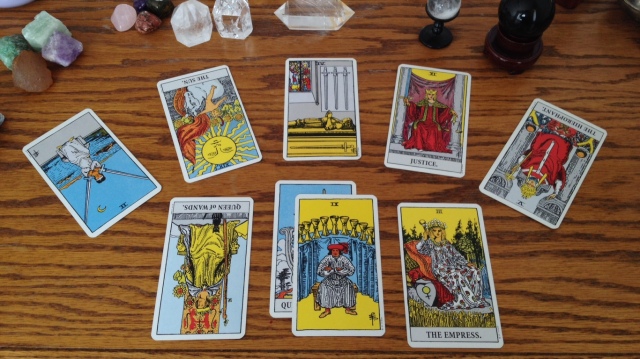 Anyway I did have a tarot point in all this. So often the messages we get from tarot are like those inexplicable coincidental (or synchronous) moments with the radio. I’m not claiming that those weirdly-timed snippets of pop songs are a form of divination. (Radiomancy? Hey, it’s got an Urban Dictionary entry; must be a real thing.) But it’s a synchronicity that, given the timing and given what’s going on in our lives at that moment, takes on personal significance that causes us to reevaluate what we’re doing or where we’re headed. It’s a moment of strong connection between ourselves and something bigger and greater, something that often feels divine.

Like many a tarot reader, I get that handful of clients who either want to be willfully ignorant of my ethical approach to tarot or who, in spite of knowing that I don’t do fortune-telling come to me anyway wanting me to tell them their fortunes. They are always the same clients who end up disappointed when I don’t tell them that their futures hold great riches and it will all be a beautiful fairytale ending, happily ever after with their preferred lovers. Worse yet, I feel used and my skills abused.

Yes, tarot does shine the way for us and can help illuminate our life path so we see clearer, but it doesn’t give us an easy solution. There are no easy solutions and if you’re getting a tarot reading with the hope of hearing an easy solution to your problems, then I’m afraid you don’t possess the wisdom to properly use tarot as a tool and really shouldn’t be going to readings at all.

Hearing “Bailando” on the radio didn’t solve the traffic jam. It didn’t change any of the conditions of the road I was driving on. However, it changed my mindset. And made the condition not only bearable, but pleasant. That moment of connection with the divine, that coincidence, that so-called radiomancy wasn’t about making the traffic jam go away or asking or wondering whether I would make it to my meeting on time. It was about me, and how I’d spend every moment of my time on that freeway. I could spend it cussing and wondering about the unknown, or I could roll with it and sing to “Bailando.”

Often the messages we get through tarot are synchronous, coincidental in ways that convince you it wasn’t just a coincidence, but because the message didn’t contain the answers or easy solutions we wanted to hear, we dismiss it and miss that moment of connection with God. And what a shame that would be.