Published through Schiffer Red Feather, The Poe Tarot by Trisha Leigh Shufelt is a delectable black and white illustrated deck that I’ve been eyeing for quite some time. I was one of those kids who loved Edgar Allan Poe. I’m also a big admirer of pen and ink illustrations.

And I really love a narrative-driven and thought-out tarot deck that has clearly been rendered with depth, passion, and copious amounts of research.

So it’s no wonder I’d take so easily to The Poe Tarot, which is all that and more. Bringing her depth of knowledge in Poe, weaves his life’s work, his struggles, passions, and motivations into the tarot, presenting each card as a lens through which you will ultimately find personal meaning. 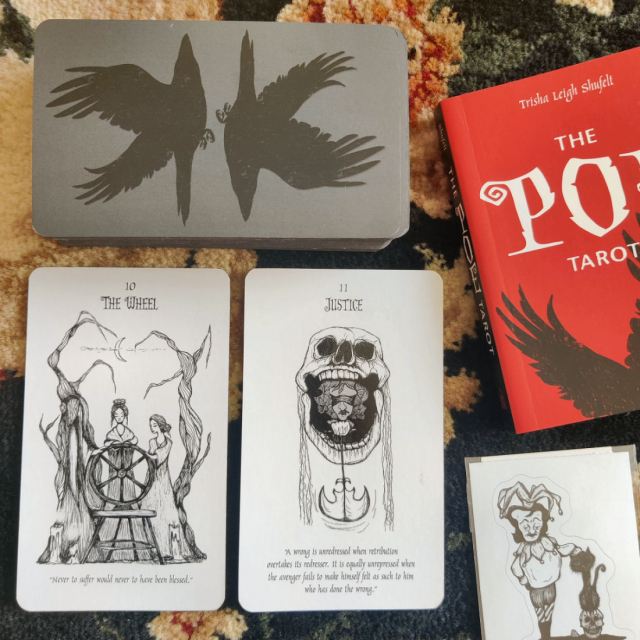 The deck art illustrates scenes and characters inspired by Poe’s classics, from The Raven and Annabel Lee to The Masque of the Red Death and many more, bringing to life traditional tarot archetypes through a macabre meets whimsical 19th century pen and ink style.

For instance, the Six of Wells (Six of Cups) pictured above illustrates Poe himself reflecting on a portrait of his childhood sweetheart and fiancee before his death, Sarah Elmira Royster Shelton, with a quote from “Spirits of the Dead.” The composition itself was inspired by Poe’s short story “The Oval Portrait.”

Poe was orphaned as a toddler, taken in by a wealthy Richmond tobacco merchant who would eventually disown the  boy, loved a girl named Elmira Royster, had a brief stint at West Point in the military, then devoted himself to eke out a living writing poetry. 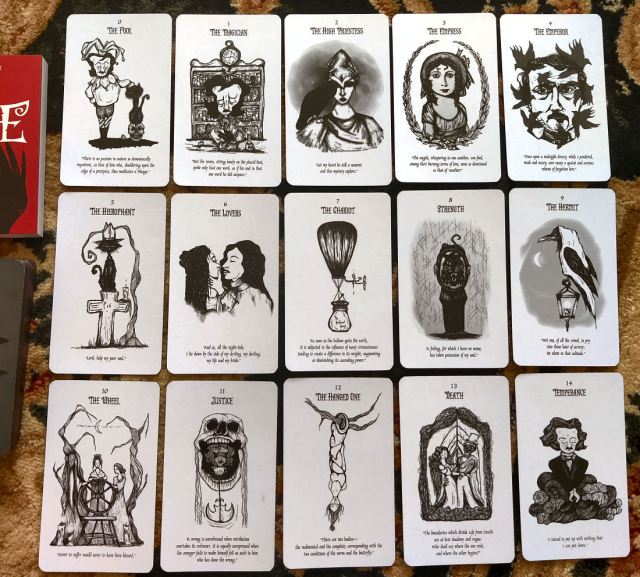 Although an easy-to-read RWS-based tarot deck, Shufelt also departs from cloning the RWS, which I really love about this deck. You get a strong sense of creativity and discernment from the artist. What’s more, the precise ways Poe’s stories have been merged with the RWS will delight every Poe nerd.

Direct quotes from Poe’s works appear as the oracular message on each and every card. Key 11: Justice, one of Shufelt’s favorite cards in the deck to create, departs from what you might normally think of as the iconography for Justice, and instead, we have the idea of a blindfolded Poe inside the mouth of a skull swinging a pendulum of justice. The quote you see here is from “The Cask of Amontillado.” 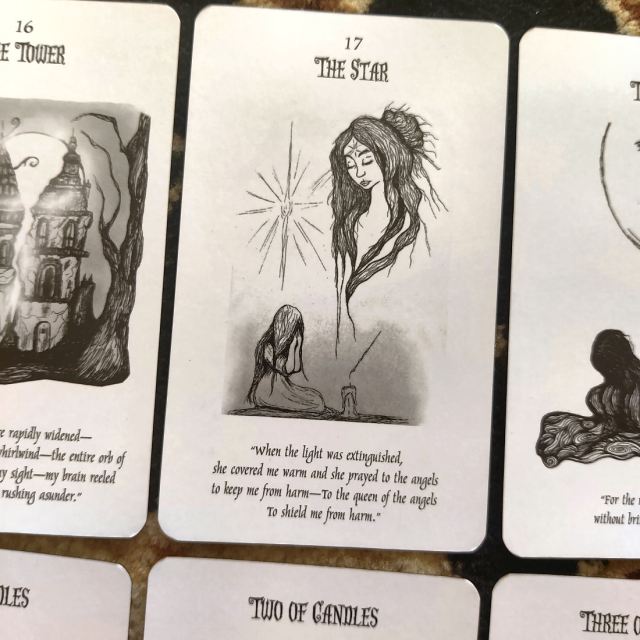 I love that Star card, by the way, quoting from the poem “For Annie.” The poem is about a dying man’s revelations on death, rebirth, and love as the suffering he has long been enduring finally comes to its end.

The guidebook will source where each quote comes from and just enough insight to help you interpret your readings. What I love most about the guidebook is its overview of Poe history and Shufelt’s own artistic visions behind the cards.

When we deck creators sit down to write the companion guidebook, we have to first decide whether the guidebook’s purpose is to be a beginner’s primer on how to read tarot cards or to explain the deck’s concept, sources of inspiration, and to deep-dive into the artist’s and creator’s intentions. Shufelt effectively went with the latter.

Poe himself is set as the main character, The Fool in The Fool’s Journey, journeying through subconscious realms. Poe, as a character, interacts with characters from his most famous works. Earlier in Key 0: The Fool, Poe is with Pluto from The Black Cat.

As you follow the quest, you yourself unveil the mysteries. The Poe Tarot pays homage to the poet himself, while the illustrations are in the style of Harry Clarke and Edward Gorey.

The four suits of the Minors have been renamed to Candles (Wands), Wells as in ink wells (Cups), Quills (Swords), and Paws (Pentacles or Coins). 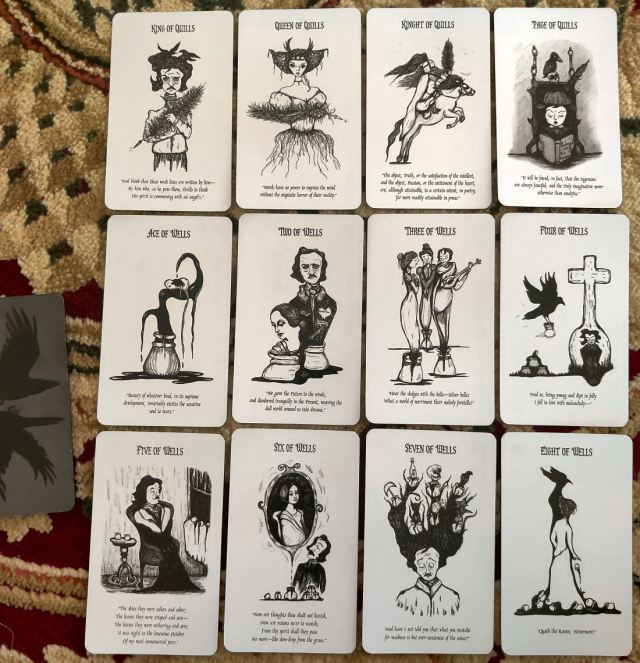 Reading with this deck is like flipping through the pages of an illustrated Victorian book of poems. It feels almost like bibliomancy. 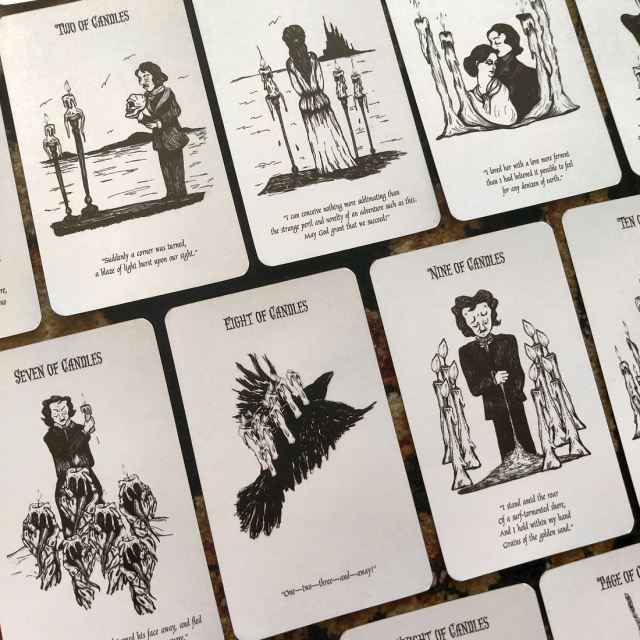 This is a deck I envision lovingly tucked into the top drawer of a writer’s desk. Countless artists and writers have referenced Poe as their source of inspiration, from Franz Kafka to Salvador Dali.

I love this line from the Foreword: “Anyone who has ever felt a sense of not belonging, of struggling to find a place in this world, and of a longing for the shadows understands Poe.” And to me, that rings true.

Shufelt assembles Poe’s most poignant lines of writing and pairs them with exquisite pen and ink illustrations that seem to come from another time to create a book of infinite stories.

Fan the cards across your desk and draw three, four, or even five at random, each to mark the acts of a dramatic structure. Then read them in the order drawn, like a book.

Shufelt is a self-taught artist who works primarily in the mediums of acrylic, watercolor, ink, clay, and paper. She is also the author of HeARTful Spirits Tarot, which memorializes her battle with breast cancer and went on to win multiple awards. When not illustrating tarot decks, she is an author of several fantasy novels under the pen name Andaleigh Archer.

I’m thrilled that The Poe Tarot was picked up for mass market by Red Feather, giving greater accessibility to this incredible deck. The shiny red edging does wear down with even mild use, but I’ve never gotten too bothered over that. It’s just something to bear in mind, in terms of production quality.

The card backs have reversible high-gloss embossed ravens set on cardstock in a standard finish. I don’t always love Schiffer’s production quality choices, but here, it hasn’t taken away from my enjoyment of Shufelt’s deck.

If you’ve got a friend who’s a nerd-level fan of Poe, an aspiring writer or poet, then this would be a lovely holiday gift this winter season!

FTC Disclosure: In accordance with Title 16 of the U.S. Code of Federal Regulations Part 255, “Guides Concerning Use of Endorsements and Testimonials in Advertising,” I received the deck for prospective review. Everything I’ve said here is sincere and accurately reflects my opinion.