I’ve gotten a bit undisciplined, or at the very least haphazard with the order I’m drawing these cards. I hop and skip around the deck, arbitrarily picking what to draw next based on my whims.

So here we are at the Wheel of Fortune.

I went with the 1870 Jeu de l’Oracle des Dames version of Card 20 for reference. The monkey king with a cape and sword situation didn’t really vibe with me. 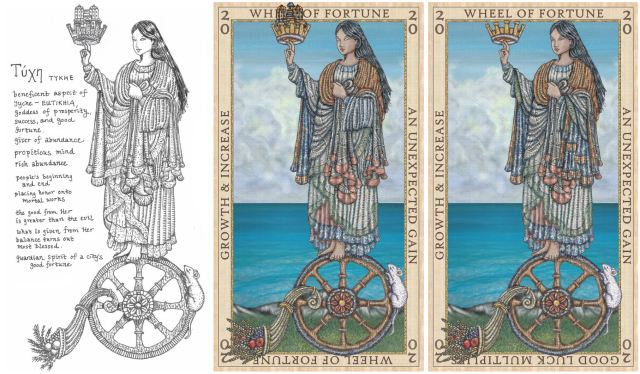 Lady Fortuna as depicted in the illustration is a syncretizing of Haudenosaunee traditional indigenous patterns draped in a Greco-Roman style. (Update: I digitally fixed her left sleeve so it wouldn’t be so wonky looking.) 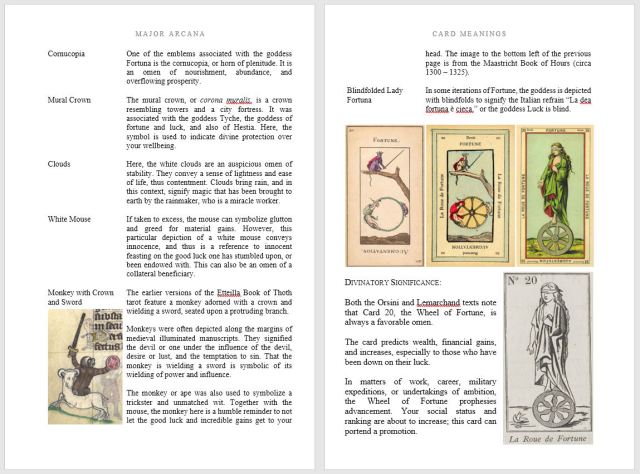 For each card entry, I translate both the Lemarchand and Orsini texts from French to English, then use those texts as reference as I write my own card entry. Although the guidebook is keyed to my illustrations, one of my objectives is for it to also work as a standalone book on reading Etteilla decks.

So, for instance, even though my illustration for the Wheel of Fortune doesn’t feature the monkey with a crown and sword, I still talk about its significance in the guidebook, and show the Etteilla editions that have that feature.

And of course there’s also the LWB. The big guidebook is an optional add-on for anyone who wants to deep-dive into a study of the Etteilla system. But the little white booklet that comes with the deck in the box should suffice.

And here are my final first drafts. Funny enough both feature full moons. In the Three of Cups, it’s to represent the theme of the card. In the Three of Wands, it’s to memorialize the day I finished that illustration– it just so happened it was the eve of a full moon. =P

The above screenshot of the guidebook includes my original sketch of Venice. I’ve been enjoying studies of renowned art and illustrations, meaning you essentially copy a master’s work. By copying that master’s work, you refine your skills. Doing studies have really really helped take my drawing to the next level. This illustration of Venice, for instance, is a study of an illustration of the same from Liber Chronicarum (1493).

The above screenshot is just a sampling of the layout for the card entries. I think having that side by side comparison of the Etteilla II and my version is helpful. In many of the entries, images from the other Etteillas are also provided. The featured version is the Lismon Etteilla II only because it’s the one I have high-res image files of.

I’m currently working on the Four of Wands. The left-most two above are from Etteilla I, then the center is Etteilla II, and the right-most two are Etteilla III.

You’re about to see a bunch of different versions, with minor variations, of my Four of Wands work-in-progress. Still tinkering around to figure out exactly what I want.

This is a study of The Accolade (1901) by Edmund Blair Leighton. Per the Orsini card meanings, “Accolade” is one the listed keywords for Card 32. I used the grid system to draw it, so it’s not exactly freehand. Pro artists say that using the grid system is cheating. Eh, it probably is. =)

But for me as one who is still learning and honing my skill set, it’s been one of the most effective training techniques for improving freehand. Draw with the grid system a few times, then draw freehand– suddenly your freehand sketches have leveled up.

[For those who aren’t familiar with the term, “grid system” is a drawing technique where you plot a Cartesian grid over the work of art you’re trying to replicate, then reproduce that same grid proportion on blank canvas. You isolate study of each cell in that grid and copy what’s in that cell on the work of art onto your blank equivalent cell.]

The blank part in the lower third that’s just grid paper is what I’m currently working on. Given how I placed the knight, how am I going to make the reversed illustration work? Yah I dunno yet.

As for which version to go with for the upright illustration, I think right now I like the prominent placement of the sun in the above left version, for symbolism reasons, but the more distant city horizon line, the way you see in the above left.

Welp, there’s the cliffhanger. =) Stay tuned for the next update on how the Four of Wands turns out. =)