I am so excited to be offering you this pre-publication glimpse of Zeke’s Arcana, painted by Melbourne-based artist and art YouTuber Julia (who also goes by Zeke, hence Zeke’s Arcana).

Her work is often described as “strange, prismatic, and unearthly,” and Zeke’s Arcana is true to those words. Julia and her creative partner Jules teamed up to produce this fresh and bubbly RWS-based deck of cards.

The deck project began around 2018, and the journey of creating these cards is documented in a series of videos on the Zeke’s Lunchbox YouTube channel.

A Kickstarter crowdfunding campaign launches on September 30, 2021 to fund the production of this vibrant art deck. To retrace the artist’s incredible journey, check out this Playlist of all videos relating to Zeke’s Arcana Tarot. 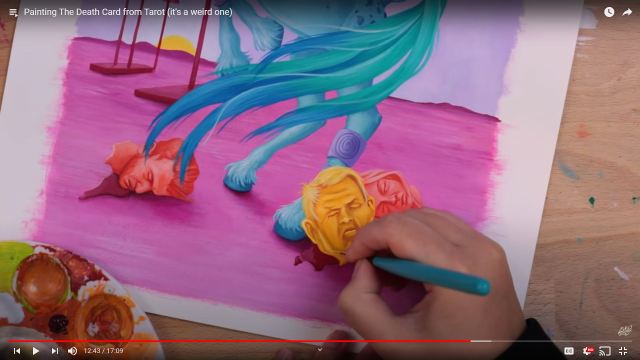 In this pre-release glimpse, you’re going to see how the Three Septenaries of the Majors are assigned a specific color palette.

The color coordination then continues in the Minor Arcana, mapping out four distinct geographies based on the four elements.

The Major Arcana cards are done in acrylic paint. Watch a video of the artist painting The World card. You can see the saturation differences between the original painting that you see in the video and the digitally retouched version printed for the deck, which you’ll catch a glimpse of later in this showcase.