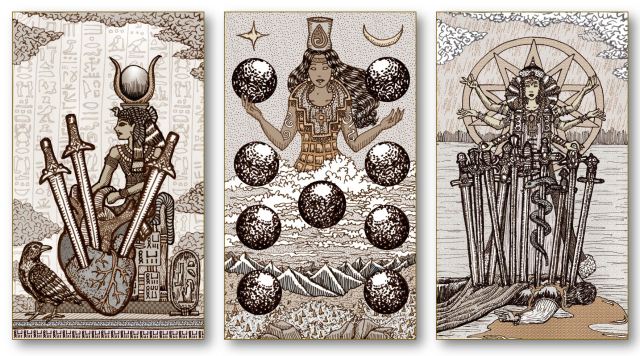 To quell any confusion, yes, I’m at work on a third edition of the Spirit Keeper’s Tarot. No, not a new deck,  but a new edition of an already existing one, the SKT.

I have not yet arrived at a decision on coloring. Do I want it in sepia? Grayscale with accents of colors? Full color via digital applications? I don’t have any answers. I’m going to give all of the above options a few tries, compare, and see which path is right for SKT the Third.

The images in this post are sepia-toned only because my first order of business is to produce both a black-and-white and also a sepia-toned set of base images to work from. That way I can tinker with both and see which I want to work with when creating the full deck.

Above is Key 1: The Magus (Magician) card. Left to right: First, the line drawing of the key that’s provided as part of the free download of the Major Arcanas. Next to its right is the 2018 First Edition black-and-white version. Then it’s the 2019 Vitruvian version. And the right-most image is what I’ve been playing around with in 2020. 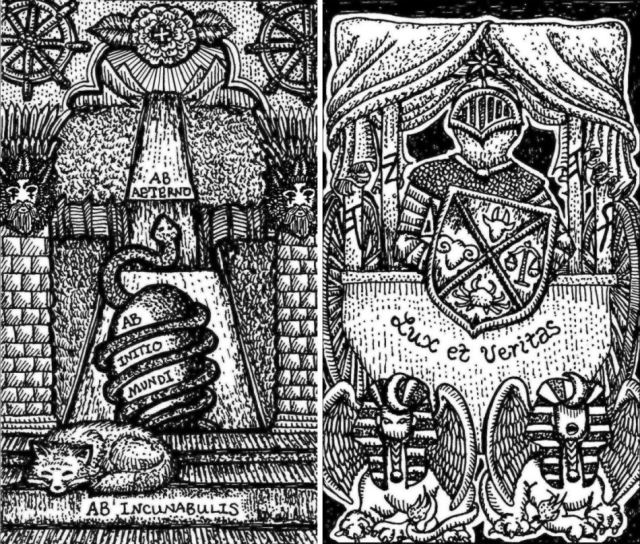 With the whole coloring-the-deck thing that was the free Majors and SKT First Edition, the idea was a foot path and giving you a map. Then I was hands-off. You gotta go do what you gotta do to get to where you want to go.

I’ve got very different plans, intentions, and ambitions for SKT #3. The first order of business was to reduce abstraction and transform many of those abstractions into personifications.

Here in Key 1, where the Vitruvian Edition (above left) featured the words, “As above, so below,” I transformed the words into a Shinto priest wielding a wand crafted as Eliphas Levi described it in Transcendental Magic, wearing a kitsune (fox spirit) mask, with body language conveying “As above, so below.”

The triple goddess insignia from the Vitruvian Edition has transformed into the veiled priestess wielding twin merkabah stars.

I wanted to zoom out from the frame of the Empress in the Vitruvian SKT (above left) and also shift setting. This year I bought a drawing pad and I am now teaching myself digital or new media art. Digital techniques have completely opened up my possibilities.

The black and white 2018 First Edition was hand-drawn in pen and ink on white cardstock, then scanned in, cropped to tarot size, and that’s it. There was minimal digital tweaking– maybe cleaning up a couple of stray pencil lines I didn’t fully erase here and there, but you were basically getting the original drawings.

For the sepia-toned 2019 Vitruvian Edition, I went back into the original works of art with different size pen tips to add more depth and visual interest, like more cross-hatching, filling in, etc., and then re-scanned, then digitally converted from black and white to sepia tones.

This still-unnamed SKT the Third will be incorporating more new media art techniques, though I’m still keeping it minimal, to “as needed only.”

You can ignore this redrawing for The Emperor. I need to try again. This isn’t it.

Left up top: Vitruvian version of Key 4. Right up top: Nothing. I’ll be scrapping that and starting over. Not sure what I was thinking.

I was going for an eagle headed Emperor, but what I actually ended up drawing was that penguin from Happy Feet, which, no, was not my intention.

And… now you can’t unsee it, can you.

I’ll be trying my hand at redrawing The Emperor card again, so for now, just chuckle and enjoy the silliness of that doodle.

In The Hierophant, the Sign of the Benediction along with the papal tiara have transformed into a bodhisattva holding a vajra in the right hand and a pentacle in the left. I’m also going to be changing the card title from The Holy See (First and Vitruvian Editions) back to the classic Hierophant. Maybe. No, you know what, don’t quote me on that. I don’t know yet. 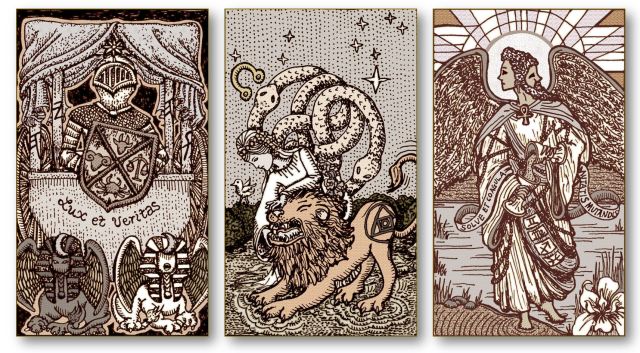 I’ve also been tinkering a bit with color. Coloring is tricky, because I want to preserve that Old World aesthetic. When you use digital media to color, it looks too modern.

When you study colored medieval and Renaissance illustration (I’m not talking about fine arts, e.g., oil paint; illustration vs. fine arts here), it’s splotchy, doesn’t quite have the sophistication of shading that artists today tend to work with, so I have to be very thoughtful about the way I apply coloring. Realism isn’t the objective.

James does not like my revision of Temperance at all and finds my new version super creepy (he says), but I’m digging it. What do you think?

Personally, I think the double-headed Temperance angel is so much more meaningful.

Theologia and Prudencia from the Tarot Mantegna inspired my Temperance head change.

Is this revised image of Temperance (titled The Angel in the SKT) a little unsettling? Yeah, probably. But I love the symbolism and duality of the young maiden and old man facing opposite directions but sharing the same body to represent the Holy Guardian Angel.

Above to the right is my work-in-progress redrawing of the Ten of Swords. I shared some progress images on my Instagram feed here.

If you’re familiar with acupuncture/acupressure, the medicine snake is coiled around the sword pierced into the adrenal point, which is the chakra of physical vitality. It’s also known as the Shu Mansion, connected to how awake or fatigued you are, your immunity, blood pressure, and metabolism.

The Mongolian sorceress is performing a Taoist ritual of invoking a many-armed goddess. I’m depicting the formation of her magic-induced qi life force as a decagram, or star with ten points.

And if you recognize the hand mudra formed in the right hand of our slain figure, you’ll recognize it as the sword mudra, which means this figure was a magus or sorcerer himself. Though in the original RWS Ten of Swords, the fallen guy’s hand gesture was probably supposed to be the benediction sign, not a Taoist magician’s hand mudra. It’s just kinda cool that it happens to be both! =)

Both the previous version of the Three of Swords and my redrawing (above right) tell the story of Isis and Osiris, and by extension, the birth of Horus. So this is the Isis, Osiris, Horus trinity. I shared my pencil and ink sketches here.

In my redrawing I added a raven as a spirit messenger to guide the querent out of their Three of Swords moment.

The background wallpaper is my own rather shoddy attempt at copying, by hand, excerpts from the Egyptian Book of the Dead, as the passages were inscribed on the walls of a royal priest’s tomb in Saqqara. On the walls of Isis’s throne are variations of the magical power word hekau.

So the SKT is still a fluffy tarot deck. 😉

Above is the Nine of Orbs (that’s the suit of Coins in the TdM, Pentacles in the Golden Dawn tradition and per the RWS, and Disks in Crowley’s Thoth). This revision is deeply meaningful to me for so many more reasons than I care to share. I hope when you see this card, you’ll feel the depths of its sentimentality. =)

Let’s just talk about the illustration. I’ve tried my hand at illustrating the Inca goddess Ch’aska, who is Venus as the Morning Star. (The decan rulership over the Nine of Pentacles/Disks is Venus in Virgo.) She’s associated with maidens, princesses, fertility, abundance, dawn, and morning dew. Ch’aska is why flowers and fruits grow aplenty.

You’ll also see the Andes mountains, and in the foreground, the magic flower of the Incas, the cantua buxifolia, which is the national flower of Peru. Ch’aska’s crown and royal jewelry designs were inspired by archaeological artifacts. The spiral tattoos were symbols carved into ancient Inca temples near Cusco. On her right arm is the symbol for the Origin of Life, picturing the union of male and female to create a new being. The one on her left arm means the Creation of the Cosmos, or the evolution of life from the Milky Way.

Here are my early pencil and ink sketches of Ch’aska.

To clarify any lingering confusion, I am not creating a new tarot deck.

I’m making a few changes to produce a third edition of the SKT because I still want to work within the framework and the architecture of the SKT.

If I were to create a new tarot deck, then I would want to design an entirely different framework from what the SKT is. Otherwise, what’s the point? A new tarot deck would need to be thematically different from SKT, and right now, I’m still working within the SKT universe.

Just so interested parties have a sense of the time frame I’m projecting, this deck won’t be done until 2021. I haven’t yet decided whether to produce and therefore sell the deck in 2021 or 2022, so I could very well push pre-order and sales to 2022. But 2020 is out of the question, especially since I still have so much learning to do.

My goal for 2020 is to learn how to use my drawing tablet. I find myself still relying on drawing by hand. I don’t like how the stylus feels and I think I’m too old of a dog to learn new tricks, because I can’t get used to the tablet screen either. Learning how to work with multiple layers and figuring out how to select colors from the color wheel to apply shading has been quite a challenge for me.

So right now my short-term goals are to finalize the line drawings for the third edition, which includes redrawing several keys, and having both grayscale and sepia-toned sets of those images before I tinker with color.

Will the third edition be in color? Right now, I have no idea. I can tell you I’m having a ton of trouble working with color. Digitally applied color makes the cards look way too modern (at my current proficiency level with the tablet, at least) and detracts from that occulty aesthetic. =) So we shall see. =)