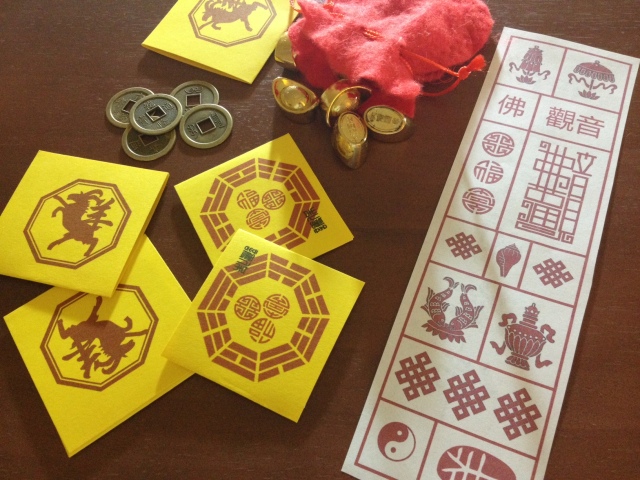 Hubby is the Year of the Horse, which means this year, 2014, is going to be a year of major changes and flux in his life. At least that’s what the Chinese believe. It’s called your Ben Ming Nian. Every lunar year is governed by a zodiac house and there are 12 of them. When a lunar year is your zodiac house of birth, you will be experiencing a great deal of flux that year, which can be great if you’re careful and proactive, but can quickly become misfortune if left unchecked (chaos theory? entropy?).

Growing up I’d hear about the Grand Duke Tai Sui. Every 12 years the Grand Duke reigns over a different zodiac house and when he’s in your house, you better move out or risk offending him. Move out, good luck. Stay put, bad luck.

Turns out he’s Jupiter. As in the planet. Jupiter’s orbital period is 12 years and each year it appears to be in a different cardinal direction in the sky at particular degrees, and that corresponds with one of the 12 zodiac houses of the lunar calendar. Since it’s also the largest planet in the solar system and bright enough to cast shadows on earth, it is believed that the energies of Jupiter can greatly affect the personal energies of those on earth. It can exert interfering energetic waves on the earth’s magnetic fields and thus affect our personal Qi. It most affects the personal Qi (energy) of those born in a year corresponding with the zodiac house that Jupiter is in that year. 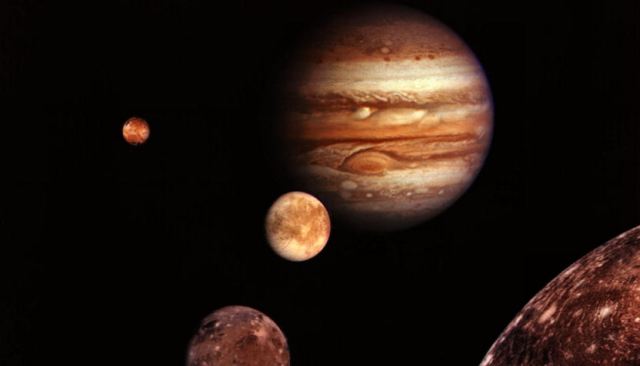 When Jupiter (aka Grand Duke Tai Sui) is in your house, your personal Qi will be thrown for a ride, which can be a really good thing if you know how to keep it in check, but can be an awful thing if you don’t. Enter fun Chinese superstitions. They’ve got all sorts of talismans, rituals, and other incredible ways to “please the Grand Duke” and avoid “offending him.” Basically, know that your personal Qi will be in flux and be aware and conscious of how to navigate that Qi in flux so that it doesn’t afflict you but rather, supports you.

Now my Hubby is an interesting character. He is a full on skeptic… until shit hits the fan. His year went off on a rocky start and he’s worried about his Ben Ming Nian. Ben Ming Nian just means it’s the year of the zodiac house that you were born in. He was born in the year of the Horse and now it is the year of the Horse. It’s his Ben Ming Nian, you would say. You would be surprised, floored really, how many perfectly intelligent and rational Chinese people flock to temples and energetic practitioners to try to get their good mojo on for their Ben Ming Nian. Hubby knows that a few years ago it was my little sister’s Ben Ming Nian and her year, too, started off hellish. I assembled some happy charms and sent them to her. By that year’s end, she met a wonderful guy who is still the love of her life right now (they’re making plans to marry soon) and she got an offer to work at the biggest law firm in the country, in the city she loves, Manhattan. So this year, 2014, Hubby nagged me to do the same for him.

So I gave it a shot. There are essential elements, if you will, to crafting Ben Ming Nian talismans. Here they are:

Asians can get a bit elitist or oligarchical, if you ask me, and so they further say only certain people can perform charging rituals, like priests at temples or practitioners with very strong Qi, have awesome good karma and a big happy aura around them, so on and so on. I don’t believe it for a second. If you’re in the right frame of mind, have strong conviction, faith, and a specific intent, and generally speaking you are not a god-awful human being, then you can do the charging ritual. What I do believe is this: you can’t do it for yourself. You can only perform charging rituals for others. I can really dive into my rationale for that theory, but a different time, different place.

How serious has Hubby been about his Ben Ming Nian? His home office desk is planted right in the most offensive position to the dear Grand Duke and even though our place is quite small and not conducive to a whole lot of shuffling of furniture, we’re going all out to reposition stuff so that he is as far from the Grand Duke’s cardinal direction as possible this year. Where he’ll be moving his desk is also where I’ve put up all my designer handbags and so he will be surrounded by women’s handbags. Apparently that is just all right with him this year. Ordinarily he might put up a fuss. This is all quite amusing to me.

FYI, see the above zodiac chart and how crosses are formed (blue highlighted cross, green, red)? Those who are born in the year of the other houses should tread carefully as well, though not quite as carefully as those who are in their Ben Ming Nian. For instance, 2014 is the year of the Horse, the blue cross. The Rat is in direct opposition, so those born in the year of the Rat should take care as well. Roosters and bunnies are not in the direct line of fire of this fearsome Grand Duke, but they should also take care.

I have no idea. I tried asking my mother, who knows, but she responded with her typical response when she doesn’t want to get into an exhaustive explanation of something that she doubts I’d understand anyway: she said, “it’s complicated and involves feng shui and deep understanding of the lunar calendar.” Sigh. Oh fine. 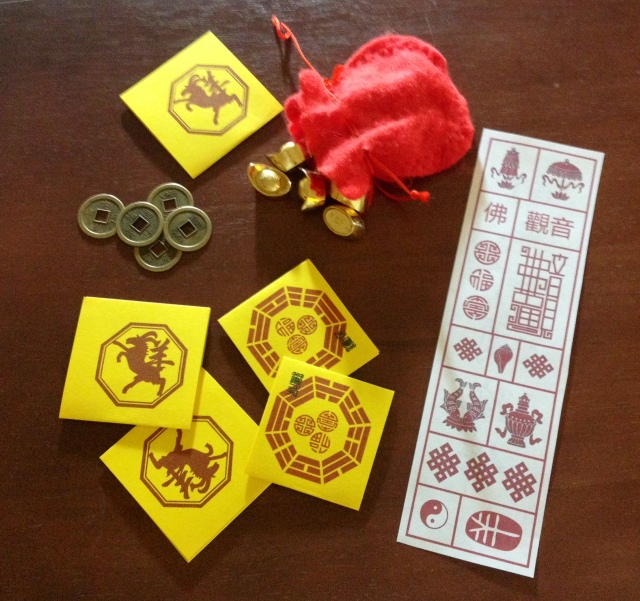 For those who are born year of the Horse, their Secret Friend is the Sheep, so talismans crafted to protect against bad mojo in your Ben Ming Nian should include call signs representing the Sheep. I made little golden matchbook like thingies for Hubby for ease of carrying around in his wallet, briefcase, slipped into his jacket, and the seat of his motorcycle. That yellow-gold color is said to strengthen the frequencies of spiritual powers that conquer evil spirits. I used red ink because red is auspicious energy for neutralizing bad luck. One side of the matchbooks show a sheep with the Chinese character for sheep. The other side is the Ba Gua, which is believed to help balance the eight feng shui areas of your life, represented by the eight trigrams. The Ba Gua is also about balancing the Wu Xing, the five elements.

In the center of the Ba Gua I have traditional Chinese sigils for Fu Lu Shou, the trinity of prosperity (Fu), good luck (Lu), and longevity (Shou). The Fu Lu Shou is believed to neutralize the Three Killings, which are especially harmful to those in their Ben Ming Nian. The Three Killings are poverty, disaster, and illness, so the Fu for prosperity combats the poverty component; Lu against the disaster or misfortune component; and Shou against illness and physical maladies.

Inside each matchbook I’ve folded up a paper talisman as pictured in the above photograph to the right, the long white sheet with all the red boxes filled with symbols. Each symbol is carefully selected and crafted for the Hubby. His grandparents are Buddhist so if he must be affiliated with a religion, he’d be more Buddhist than anything else (frankly, he’s agnostic). You’ll note the victory banner for triumph, the parasol to protect him from harm, a vase for prosperity and wealth, conch to keep in on the moral high ground, and a pair of fish for tenacity and courage, so he won’t feel disabled or insecure in the face of his Ben Ming Nian. Then there’s a bunch of endless knots to reinforce all of the above. There are also Chinese characters for Buddhist deities, specifically the Buddha and the Goddess of Mercy. At the bottom affirming the sigil is the yin yang tai chi symbol, which is one of the essential elements of the talisman, for ensuring harmony and balance in your personal Qi this year, and the symbol for Sheep, the Horse’s Secret Friend.

Next came the charging. I have a prayer recitation that I use and prayer beads to help me count up to 108 recitations. With candles, light and dark to symbolize balance of the yin and the yang, and the ringing of bells (tingsha cymbals) to scatter negativity, a charging ritual was conducted on the eve of the new moon. Oh, also, inside each matchbook I slipped one of those Chinese coins for generating wealth and prosperity this year, which is important to Hubby. I also filled a red sachet with little gold ingots (also for wealth and prosperity) and placed it in the South area of the house.

If you’re the Year of the Horse, then this year 2014 is your Ben Ming Nian. If it hasn’t been that great for you so far, consider the above to help bring in some luck.