In pursuit of revealing a prisca theologia, a primordial truth about divinity, the Spirit Keeper’s Tarot journeys back to our cradles of civilization. This is a deck that integrates ancient theologies from disparate corners of the world.

I created the Spirit Keeper’s Tarot with a singular mission in mind: to design the most powerful occult technology possible. Whether I have succeeded in that mission is not for me to say, but for each holder of these cards to discern.

The Revelation is the third of three editions from the Spirit Keeper’s Tarot family, finally revealing the deck’s architecture and design in full-color.

The linework is done by hand on paper, in pen and ink illustration, then scanned in and digitally colored.

With the 108 colored seamless tiles of dotted color, I then created over 900 seamless patterned tiles. Those patterned tiles are what I use as “paint” to digitally fill in the shapes, forms, and spaces of the linework.

Thus, what appears to be blue, or purple, or beige in the illustration is in fact a multi-hued seamless patterned tile that I created from a palette of colored tiles rendered in a pointillist style. 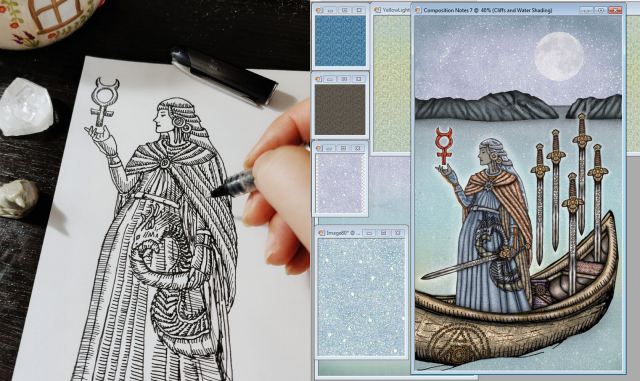 The foundational principle of the Spirit Keeper’s Tarot is animistic in its premise. A speculative (and oft-chided) premise in Western occultism is that tarot cards are living beings, that there is a spirit embodying each one. Each card is ascribed certain characteristics, tendencies of behavior, and qualities, just like any sentient creature. It’s subject to predictable habit, but also subject to spontaneity in any arbitrary moment.

Modern day tarot readers dismiss that premise as superstition. I did, too. In the face of science and contemporary rationalism, animism—this belief that objects, such as a deck of cards, might possess an animated spirit essence—is ridiculed, even censured. To believe that a deck of cards can hold spirited life is to reveal an unsophisticated intellect.

Yet that is exactly the point where I start my journey with crafting this tarot deck. What if there is a roster of known essential spirit energies in our universe that influences human events, both on the macroscopic and microscopic, and if encoded in just the right manner, a tarot deck (really, any intelligently designed system) can become much more than just pieces of cardstock? What if there really is a mad method to giving a tarot deck sentience?

My ambition was to transform lines of ink and pieces of cardstock through a precise, formulaic code—an intelligent design—into a sentient roster of spirit calling cards. A tarot reader who wields such a roster would then become a spirit keeper. My ambition was to give life.

I’ve also illustrated this deck with the purpose of conveying esoteric knowledge and creating a comprehensive platform for divine transmissions. To that end, a deck such as this one requires intricacy of symbolism and allegory—each card is designed to tell a story, to introduce you to a complete psychic realm, and to invite you to pathwork and journey into that realm.

Finally, each card is designed under strict adherence to principles of talisman crafting and ritual magic. Astrology, numerology, alchemy, and a portfolio of mystical and shamanistic traditions converge to engineer a deck that can jailbreak your own mind and gain you access to your full psychic and spiritual potential. The Spirit Keeper’s Tarot is a skeleton key for opening gateways that you had otherwise felt locked out of. 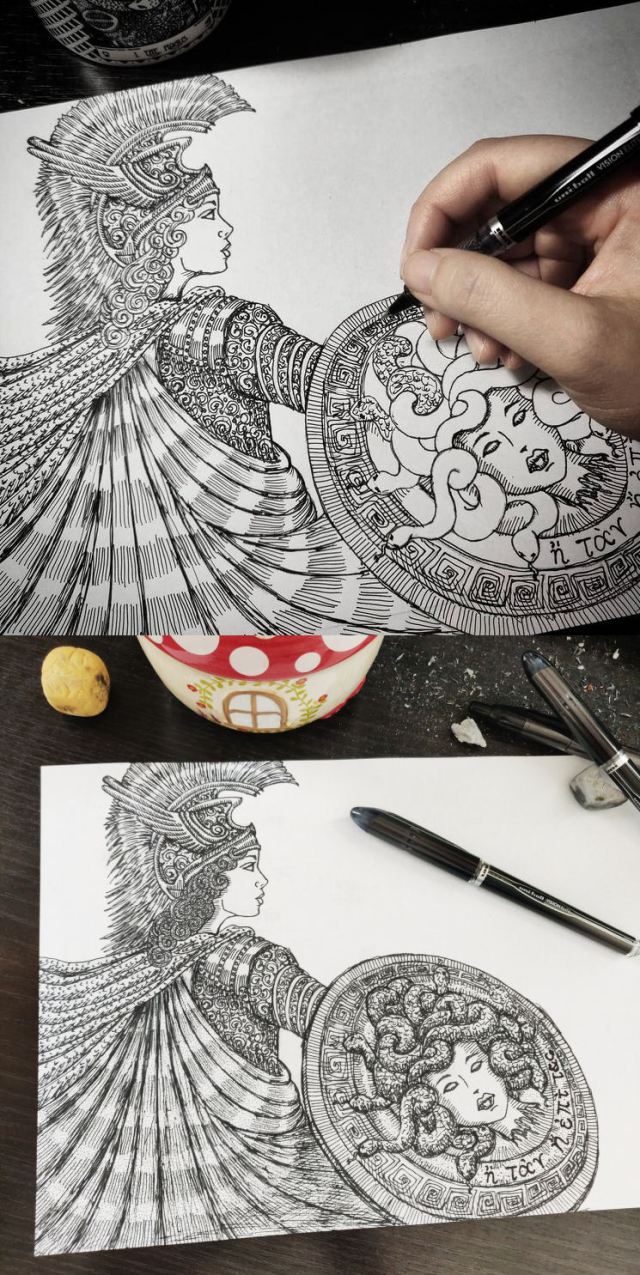 Research for The Revelation edition was just as if not more laborious than the illustration work. I consulted over 200 bibliographic sources for this deck, vetting each based on the author’s curriculum vitae and the book’s publisher.

This is an 80-card deck that follows the traditional tarot structure of 78 cards, with the additional feature of having 3 versions of Key 0. My objective was to merge the Rider-Waite-Smith Tarot with the Crowley-Harris Thoth. Then as the deck evolved, it became its own independent system, to be approached in a way that departs from both its parents.

Sure, your tarot knowledge will guide the way you read these cards, but take care that your experience doesn’t become your limitation. Clear the channel to your psychic and astral awareness. Let the voices of the spirits speak to you directly.

Do not be afraid of what you do not know. Rather, let what you do not know inspire you to receive the divine teachings, straight from spiritual teachers invested in your higher good. May these cards transmit to you prophetic messages from beneficent spirit realms. May you receive only as you are ready.

Still some final touch-up work to do on the illustration and crappo, as I post this now I already see mistakes and ickies that need fixing, but here's the #PageofDisks #PageofPentacles
I was inspired by a raw brussels sprouts salad from Magnus Nillsson's The Nordic Cookbook. Instead of hazelnuts, I went with pistachios just because that's what I had. There's also corn and craisins in mine for sweetness. 😜
Left image on each slide: early 2020 first full-color draft. Right: 2021 most recent revision. Just minor tweaking here in the four Knights.
Illustration of a Buddhist monastery.
The SKT court cards system is different from the preexisting tarot court systems. Archangels (see prev IG post) are King equivalents and here, Shields are Queen equivalents, but in both tiers, Fire and Air present as male guardian spirits while Water and Earth are female guardian spirits.
The Spread Machine Cards & Oracle by Kim Tsan is kind of ingenious! Here are snapshots of my current reading table setup. I lay out the Spread Machine cards separated out by category. I also have the Quest and Change packs, which add so much and are totally worth it.
I wonder if I would've been this thoughtful over world-building if it wasn't for the quarantine. It's as if my physical body feels so trapped that my astral body just flees off and away, as far as it can go, then stays there long enough to get this much detail. It's beautiful and sad, all at the same time.