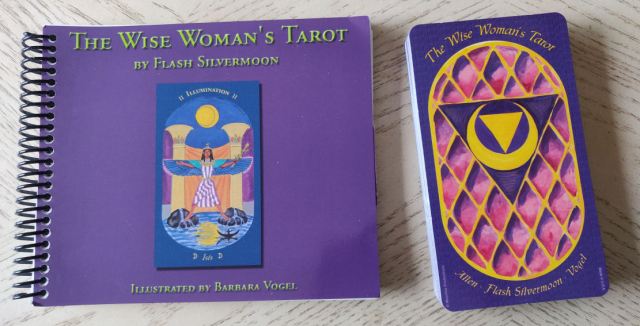 I’m reviewing a 2002 First Edition printing of the deck, which comes with a spiral-bound companion guidebook. While a great beginner and introductory orientation into the world of tarot, the guidebook presents tarot through a specific lens.

For example, in the section “The Heritage of the Tarot,” in talking about the origins of the tarot, there are references to Atlantis-Lemuria. The Wise Woman’s Tarot deck is “a Pandora’s Box of women’s mysteries,” notes the Introduction, inspired by the deck creator’s spirit guides, who urged her to make this deck.

The deck was completed on August 31, 1999 at 12:00 pm in Florida. I love that the author included that information– you know it’s for astrology reasons, and all of the astrological content in the guidebook confirms the creator’s intent to integrate astrology into this deck.

The Major Arcana express “a coherent story of our spiritual evolution to this point,” and toward that objective, Silvermoon re-ordered the Major Key numbers. So you do want to make note of the non-traditional numbering in the Majors. The first few times I worked with the deck, I had to do many double-takes and pause, turn to the guidebook, and reorient myself.

For example, Key 7 is The Gorgon, Medusa, corresponding astrologically to Gemini. (Traditionally we’re familiar with Key 7 as being The Chariot, corresponding to Cancer.) Key 9: Synthesis, Cerridwen is Sagittarius, while Key 10 is The Healer: Sarah from the Hebrew Bible, corresponding with Virgo, and so on.

To zoom in for a single card study, see Key 18, which is now Justice, corresponding with Maat and Libra. Per the guidebook, when the Justice card comes up in a reading, “you will literally get what you deserve. There is something karmic and timely pertaining to whatever area or issue it surrounds.”

I love that the guidebook is spiral-bound. It lays flat on a desktop for easy study. Inserted throughout the book are also personal photographs that Flash Silvermoon shares with us. I also love that it’s in full color.

The above-pictured outline of all Minor Arcana card meanings at a glance is a wonderful reference. By the way, you’ll notice that the borders of the cards are all color-coded, so below, as we enter the suit of Wands, all borders are red.

I love the ways Flash Silvermoon has reinterpreted each key, while remaining true to each card’s core essence. For example, the Eight of Wands is now the Arrows of Love, and indicate the speed of falling in love, or perhaps it is merely lust. The Nine of Wands features Dziwozony, a Polish name for wild women who live in the woods.

Let’s talk for a moment about the cardstock. It’s thin. In fact, it’s thinner than any business card I’ve ever had printed up, so yeah… thin. However, it appears to be coated with a semi-gloss finish, which does help to add a little support to the cardstock.

In the guidebook, the court cards are separated from the Minors. Here, gods and goddesses from various pantheons are featured among the courts, which are now titled: Priestess (Queens), Shamans (Kings), Seekers (Knights), and Maidens (Pages).

I don’t want to lose the card titles and captions with the divinity names, otherwise I might consider deck modification and trimming these cards into those oval shapes. That would make for such a cool deck to read with!

By the way, just look at the detailing. Vogel did an incredible job bringing the visions of this deck to life!

Here you get a preview of the card entries in the guidebook for each of the Minors. While short, they’re succinct and give you plenty to work with.

In the Cups suit, corresponding with the Water signs, you’ve got Sappho, the archetype of the artist; Oprheus, a sensitive man with mystical powers; Lan Ts’ai Ho (or Lan Caihe), one of the Eight Immortals, an intersex divine patron of music and theater; and Epona.

Silvermoon has put in an enormous amount of thought into this deck, and it shows.

The guidebook is exemplary at intersectional tarot (what I’m calling it). Tarot cards and their associations with established pantheons from all over the world– tarot and astrology; tarot and numerology; tarot and animal spirit guides; tarot and chakras– you’re going to find reference tables for all of these in the book.

Citations, end notes, the amount of research that went into crafting this deck is impressive. Oh, wow… look at that Nine of Swords. Witch.

It saddens me that I never got the chance to converse directly with Flash Silvermoon. I want the opportunity to tell her what an incredible deck she’s created. You really get the sense she was dialed into something to have produced this kind of deck with the scope that it commands. 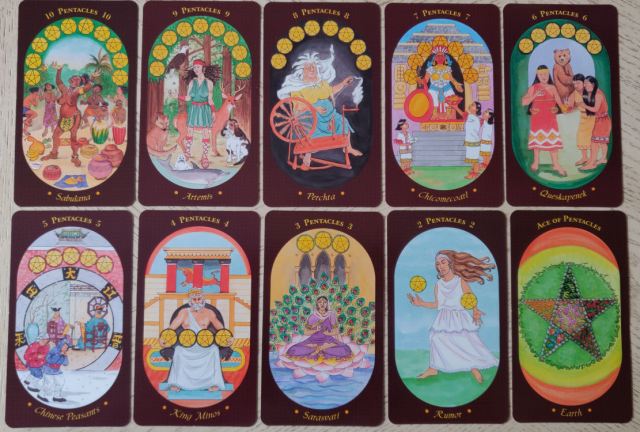 A multicultural, matriarchal, magical mystery tour, she calls this deck, and for sure, the deck creator and artist have achieved just that.

The deck itself was completed by its creator in 1999, and so it has captured that 90s Dianic Wicca and Goddess aesthetic. By the way, I was reading Diane Wilkes’s 2003 deck review of the Wise Woman’s Tarot, which is linked here, and wanted to share her opening line:

“I must admit to an initial feeling of derision when I first encountered the Wise Woman’s Tarot. My reasons were two-fold; the deck is highly idiosyncratic and personal, and it has a separatist feminist ‘feel’ to it that I consider both unbalanced and offensive. I don’t know if I’ve changed in some way or if I was merely in a great mood when I finally sat down to write this review, but I can see charms I missed on the first go-round.”

Wilkes also describes the deck and book set as eclectic. It certainly is that!

In terms of reimagining the tarot through a separatist feminist expression, for me, while a go-to all-purpose workhorse tarot deck would need to have balance, I don’t mind that artists choose a niche and create a deck out of that niche. I love collecting tarot and oracle decks that reimagine cartomancy through a very niche lens, and the Wise Woman’s Tarot is no exception.

The guidebook features many versatile spreads for you to work with. I’ve found that when you use the Wise Woman’s Tarot in one of these spreads by Flash Silvermoon, a lot of voices come through. It’s a beautiful and unique experience.

There is something raw and earnest about the Wise Woman’s Tarot, a dedication to Goddess by the deck creator that you can just feel. There’s no polish of commercialism here, no marketing and branding savvy, just a faithful and natural veneration of Goddess energy.

I love the oval painted part of the card back design, shown above, which mirrors the oval-shaped windows of the deck art, but I don’t love that it’s got the deck name and creators’ names printed right there in a font type that isn’t perfectly congruent with the style of the artwork. Then in the bottom left corner, a copyright notice to Moonfox Productions and to the right corner, “Made in U.S.A.”

It always perplexes me why deck creators add these notices of copyright or authorship right there on each and every single card. What runs through a tarot deck designer’s mind that leads them to, “Yeah, this would be a good idea”?

There’s a strong Wiccan-inspired Book of Shadows vibe to the way the guidebook is structured. You’ve got the Dedication, invocations and prayers, the correspondence reference tables, and also a chapter of personal essays reminiscent of a Book of Mirrors.

Here’s an excerpt from the front page Dedication: “In memorium to Pamela Coleman [sic] Smith, lesbian of color– herself multicultural . . . who died in poverty, . . . her legacy stolen. She is hereby reinstated as the direct ancestor of TWWT.”

Then there’s a goddess invocation ritual that has familiar pieces of Golden Dawn influencing the invocation language followed by a catalog of goddess names invoked, everything from Hecate, Isis, White Buffalo Woman, and Amaterasu to Vesta, Pele, Kwan Yin, Oshun, Yemaya, and Habondia.

You can order this deck via Etsy here.

This deck is now out of print, by the way, and there is a finite quantity left. As I understand the circumstances, after the deck creator passed away, a loved one of hers found a few boxes of these decks among the deck creator’s personal effects.

That loved one is now helping to sell off the remaining copies of this rare, vintage, First Edition deck. Only a total of 5,000 copies of this deck exists and about half are left as of this posting. Deck collectors and those who are drawn to these images: order yours before the Wise Woman’s Tarot is gone forever.

FTC Disclosure: In accordance with Title 16 of the U.S. Code of Federal Regulations Part 255, “Guides Concerning Use of Endorsements and Testimonials in Advertising,” I received the Wise Woman’s Tarot from the creator’s loved one for prospective review. Everything I’ve said here is sincere and accurately reflects my opinion of the deck and book set.

5 thoughts on “The Wise Woman’s Tarot by Flash Silvermoon, Illustrated by Barbara Vogel”