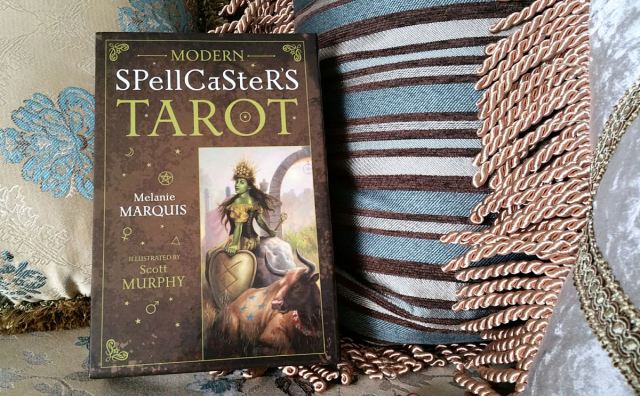 I learned a very important lesson from this deck: don’t knock it ’til you’ve tried it. The Modern Spellcaster’s Tarot was part of the free swag I got from Readers Studio 2018. When I first saw a few samples of the card images and read the back of the box, I shrugged and said to myself, “meh, not for me, pass.”

Wrong. I realized how wrong I was as soon as I unwrapped the deck and sifted through the cards.

Modern Spellcasters is that acquaintance you didn’t get a good first impression from because you’re an asshole set in your ways but then you actually take the time to have a couple of heart to heart chats and suddenly you realize holy crap, this is a kindred spirit and an amazing one at that.

Vibrant, dramatic, and emotional are the first three words that come to mind.

Click on any of these image files for a closer look and you’ll get what I’m talking about. 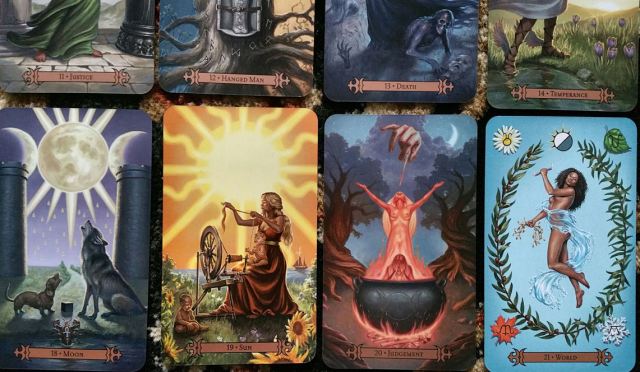 The depiction of tragicomic narratives emphasize the storybook nature of the tarot and will energize your readings with a fast-paced movement and drive that’s just incredible to experience.

Scott Murphy is an illustrator of fantasy art that I would describe as fast-paced (yes, the art) and full of action and adventure. Just a glance through his gallery of illustrations and the proverb “a picture tells a thousand worlds” comes alive for you. Here is an artist who is first and foremost a storyteller. 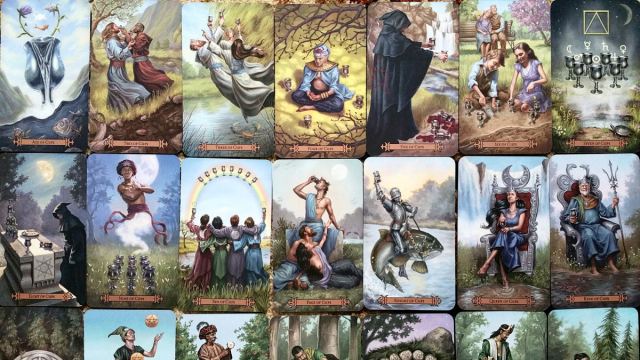 Melanie Marquis is the founder of a global coven called United Witches and as a Colorado native, the organizer behind Denver Pagans. She’s a beloved author at Llewellyn, having written for their almanacs and datebooks, and an author in her own write, a booklist that includes The Witch’s Bag of Tricks, A Witch’s World of Magick, Beltane, and Lughnasadh.

There’s something so melodic and mythic to the aesthetics of this deck. The progression of cards in each suit is clearly narrating to you a story. Characters from all walks of life are depicted honoring nature, each other, and celebrates pagan traditions.

I love the neutrality of the deck imagery and how there isn’t an imbalance of masculine or feminine imagery as you often find in contemporary tarot decks designed from a pagan aesthetic. I love how cross-cultural and intersectional these cards feel. 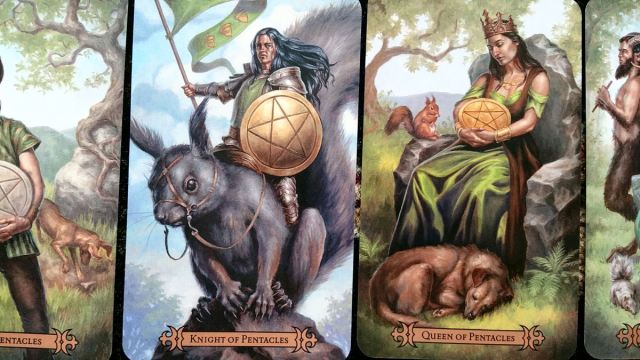 Modern in its sensitivity and yet timeless in its execution, the Modern Spellcasters Tarot will endure in relevance no matter how our cultural landscape shifts in the eras to come. In fact, there’s a prescient quality to the art and richness of symbolism here that I think you’re going to fall in love with.

I’d consider this to be a great RWS-based beginner’s deck and wouldn’t hesitate to gift out as such.

Reading with these cards transforms your life story into an action adventure. Like I said, it’s epic in scope, dramatic, and alive with movement. I’ve read reviews where the card imagery was described as a bit too edgy. Personally, I wouldn’t use the word “edgy” to describe Spellcasters, but once I heard it and then thought about it, I can see how and why some folks might consider Spellcasters to push the envelope.

I see this deck as being targeted at Wiccans or pagans and definitely those with a more Wiccan-oriented approach to witchcraft. I will also note here that the correspondences attributed to the suits are different from the ones I work with. 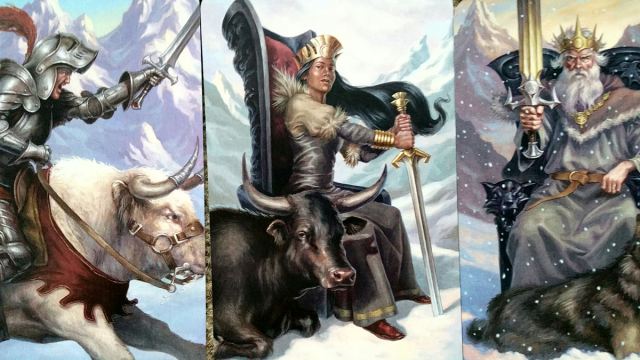 When I read with the Spellcasters, I try to comply with its own universe of correspondences. Thank goodness for the guidebook, which is wonderful!

Nonetheless, the guidebook helps to outline the complete attributions and correspondence systems so that it’s pretty easy to follow along. You can gain fluency with this deck in no time, thanks to the well-written guidebook.

I love how the guidebook goes beyond providing divinatory meanings and also provides magical or spell-crafting uses for each card. In that sense, the guidebook reads like a grimoire that helps you to operate your Spellcasters tarot deck as a tool for craft. 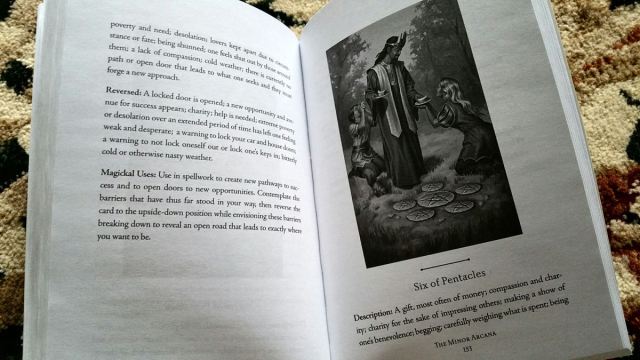 A recurring gripe I’ve heard about this particular deck is the flimsiness of the cardstock. Yes, it’s a bit on the thin side, especially if you’re used to the top quality production of independently published decks now on the market. I would compare the cardstock here to typical Lo Scarabeo decks (this is a Llewellyn deck… if the aesthetics and point of view of the card art didn’t give it away…).

After flimsiness of cardstock, the second major and recurring criticism of Spellcasters is the intensity of the imagery. Yeah. The card images in this deck are definitely intense. Many have remarked on how it’s too intense for them and found the imagery unsettling. I mean yeah, I see it. There’s a dramatization of the tarot here, undoubtedly.

For me, I liked that. I found it invigorating, different, provocative, and thus in a way, putting Spellcasters in a class and genre all its own.