Are you subscribed to The Cartomancer? If you’re a tarot or oracle card reader, then you’ve got to check out this independent magazine. 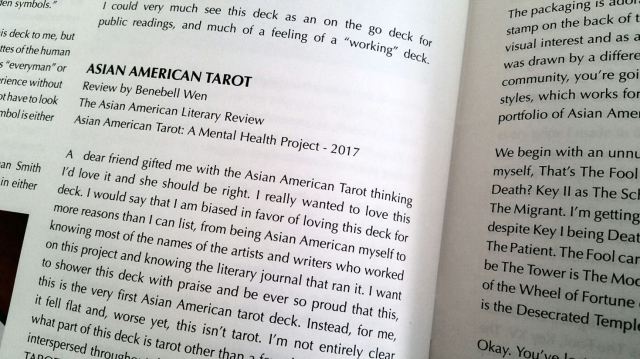 A dear friend gifted me with the Asian American Tarot thinking I’d love it and she should be right. I really wanted to love this deck. I would say that I am biased in favor of loving this deck for more reasons than I can list, from being Asian American myself to knowing most of the names of the artists and writers who worked on this project and knowing the literary journal that ran it. I want to shower this deck with praise and be ever so proud that this, this is the very first Asian American tarot deck. Instead, for me, it fell flat and, worse yet, this isn’t tarot. I’m not entirely clear what part of this deck is tarot other than a few shallow references interspersed throughout the cards and literally printing the word TAROT on the box.

What I do praise about the endeavor is it was never about creating a tarot deck in the first place. It’s about fundraising for an arts-based self-care package to address mental health issues in the Asian American community. The money raised through this tarot deck went toward a non-profit for addressing mental health. Since I’m not reviewing the non-profit’s mission and am here to review the tarot deck on its merits, I can only talk about the deck. Otherwise, for its non-profit mission, it gets an immediate A+.

The packaging is adorable. I love the “Open in Emergency” stamp on the back of the box. The artwork holds strong visual interest and as a collaborative deck, where each card was drawn by a different artist from the Asian American arts community, you’re going to get an eclectic collection of art styles, which works for me. I love that this is a hand-held portfolio of Asian American art.

We begin with an unnumbered card, The Ghost. Oh! I think to myself, That’s The Fool card. Nope. Wait this out. Then Key I is… Death? Key II as The Scholar could work, I see that, okay. Key III is The Migrant. I’m getting confused now, but still trying to stick it out despite Key I being Death.

My initial hunch was that the deck creators decided to overturn the tarot system on its head, and create a new paradigm, as if to say we fight the hegemony. So I went searching for product description and marketing copy to that effect. I didn’t find any.

There is an interview on Little Red Tarot with one of the editors of the literary journal that organized the project. The interviewer asks about numbering Death as Key I. The response was, “because we wanted to highlight the impact of structural violence… the point of racism is to exploit vulnerabilities to the point of premature death,” which just… I gotta confess, I didn’t really follow. If you want to bring in strong Asian cultural references, at least make the Death card Key IV or something, to highlight Chinese superstitions around the number 4 and death.

The deck creator went on to say, “Death is always there; we live in its shadow and in its wake. And still, in the face of that, we have to figure out how to be.” Yeah okay, even if I were to buy that premise, that still doesn’t explain why Key I: The Magician got replaced by Death. My speculation is that the folks who put the project together didn’t really know anything about the tarot, didn’t do their homework (kind of a stereotype joke here…), and then maybe after-the-fact, realized they messed up and now have to make up interesting reasons for why the crazy re-numbering. 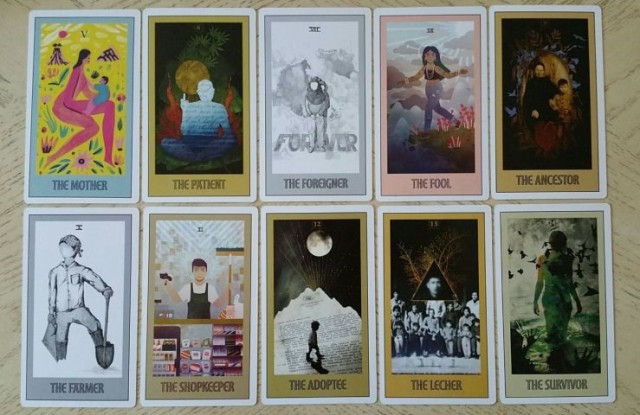 Key V: The Mother, you would think, would have been a perfectly fine Key III: The Empress replacement, so I’m not entirely sure why the restructuring here. And at no point is there any explanation for why the energies of these 23 (yes, 23) cards don’t align in any way with the classical tarot archetypes. It would have in fact been really easy to line up these Asian American archetypes with tarot archetypes and still fit the traditional system.

Also, if you’ll notice, some of the cards are numbered with Roman numerals, such as Keys V, VII, and VIII, etc. and while some are with Arabic, such as Key 6, Key 12, Key 13, etc. Again, not entirely sure if there was a carefully thought-through strategic reason for that or if it was just an oversight. 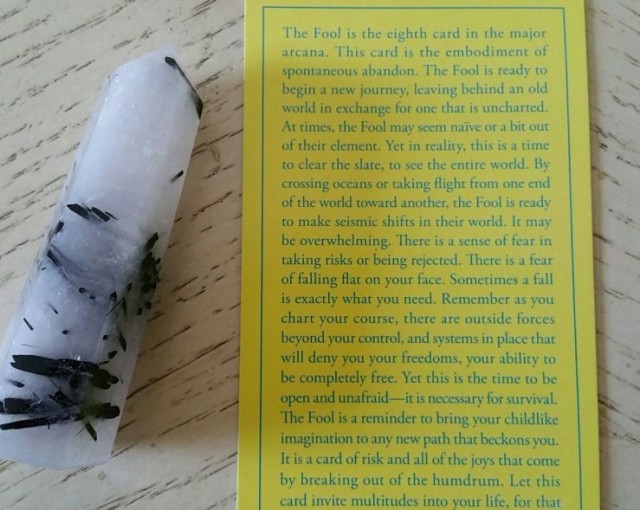 The cards themselves are not designed in a typical manner for divination. They are two-sided. One side has the art and the other side has text to explain the tarot archetype. Sort of. As you can see above, according to the text, The Fool card is the eighth card in the Major Arcana [no capitalization is offered for “Major Arcana,” which to me, further reveals the lack of an “insider” from the tarot community]. No other explanation is provided as to why The Fool card is now the eighth card rather than Key 0 or even the old school unnumbered card. Everything else in that block of text is very “Key 0: The Fool”-ish, so it just blows my mind why it’s Key 8. 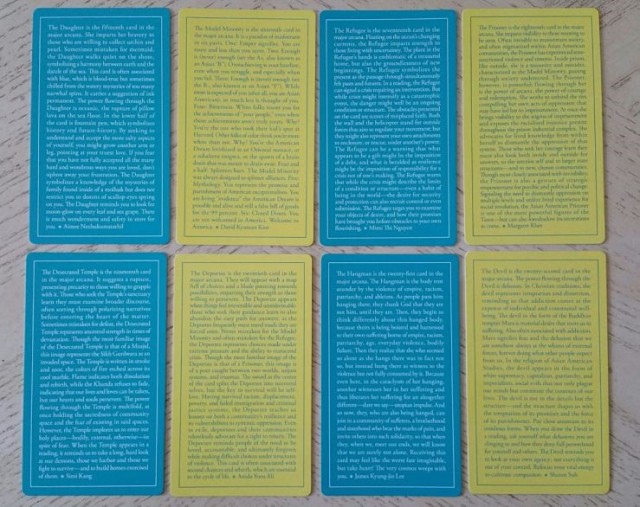 This Majors only deck consists of 23 cards in total. The unnumbered card is Ghost, though it does not correspond with The Fool. Then there is a card numbered Key XXII, something you don’t see that often in the tarot world, and it is The Devil. The text on the back of the card for The Devil cards reads classically like The Devil card in tarot, except it isn’t Key XV.

I read in an interview with Biddy Tarot that a recommended use for the Majors only deck is to replace it with the Majors in another tarot deck and then to do readings with the combined deck. So, I did. I went with a 15-card spread with the Majors mixed in with the Rider-Waite-Smith and asked the question, “What do I most need to know about my identity as an Asian American and how it affects my mental health?”

The three Majors I pulled are: The Ghost, The Daughter, and Death. I’m not sure whether to read The Ghost as The Fool, Key XV: The Daughter as… The Devil maybe? Key 1 is The Magician or just keep it as Death? And is this Death as in cessation and transformation per classical attributions or is it Death as in genocide, war, and waste, plus structural violence and racism leading to death (what one of the deck creators said was the meaning of the Death card)? That just seems like a peculiarly strong message to send in a tarot card crafted for readings on mental health.

However, as facets of the Asian American experience, The Ghost, The Daughter, and Death are prevalent facets in my life. These three facets best explain my ancestral connections and also, a lot of the work I do now as a metaphysician of Asian American descent. So as an Asian American, this is a powerful deck to work with. It speaks to me in a guttural root chakra kind of way.

Yet the Asian American Tarot disappointed me, because I expected more. Maybe that’s because I’m a tiger mom, I don’t know. The lack of knowledge in the realm of tarot was painfully evident throughout. How difficult would it have been to get an Asian American tarot reader on board for consultation?

I am totally okay with a restructuring of the tarot system and inventing a new one, but then it has to be explained. If it isn’t explained, then it needs to be self-explanatory. I pride myself in being rather astute at spotting patterns. I tried really hard and put in all of my effort to spot the pattern here and I just couldn’t. The reinvented system makes no sense to me, even from an Asian American perspective. Having familiarity in various Eastern and Western mystery traditions, divinatory practices, and occult studies, I hypothesized that maybe it was following an Eastern esoteric school of thought. If it was, I didn’t catch it.

When all is said and done, I’m deeply grateful to have this deck. I’ve been wanting to get my hands on this deck and add it to my collection, a collection that would have been forever incomplete had I not acquired the Asian American Tarot. As an artifact of the Diasporic Asian consciousness, these cards are superb. Used as a form of cartomancy, also superb. But if you’re going to call it a tarot deck, then as a tarot deck reviewer, I am obligated to point out that, well, this isn’t a tarot deck.

4 thoughts on “The Asian American Tarot & Read The Cartomancer”