Sometimes happenings confirm to me that prayers are answered and the universe is looking out for me. A little while ago, I put together a Rider-Waite-Smith keywords and reversals deck, three versions, (original blog post here) and granted all files out to the public domain and made it available to everyone for free download.

It included a Read-Me document that explained exactly how you could fully customize the deck files for yourself, from selecting your own card back design while still giving you dozens of free card back design options, and even how to edit and change the keywords to reflect ones you like. I also explained that folks could do as they will with the digital files I made. 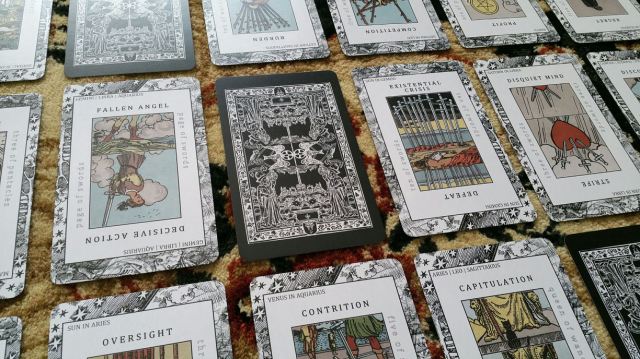 While I received many thanks and good wishes, I received an even greater torrent of messages from people kind of expecting free customer service to go along with the free deck files. It was nuts and utterly outweighed and outnumbered the thank yous.

What do I do? If I ignore them and don’t answer their messages, I’d feel like a terrible snob. If I answer all of them one by one, I would not have time for anything else in my regular life. People were asking the whole range of questions, from questions that were already answered in the Read-Me document to questions about the keywords and how they would have opted for this and that keywords instead of the ones I picked or they would ask me to provide a rationale and explain why I chose the keywords I chose. I got questions asking what I thought were the best ways to use the deck, or where to print them, how to print them, logistics, how to design a card back, which card back design was my favorite… Wow. Really? I was inundated with people wanting me to hand-hold them.

I went to sleep one night thinking that cliché thought of “gee, no good deed goes unpunished.” I hate dealing with sales and customer service and by giving the deck files out for free, I had opened up an unforeseen can of worms. I had figured folks would understand they’re on their own. I guess not. Suddenly, I was being treated like a deck creator even though I am not one, don’t identify as one, and don’t want to be one.

And yet I really liked the idea of the keywords and cut-splice card images for reading reversals. I wanted it to be made available to the public but– admittedly– I didn’t want to deal with the public…

The next morning, my prayer was answered in the funniest of ways. U.S. Games reached out to me and told me they’re admirers of what I have been doing and contributing to the tarot world. They want to work with me! Mr. Stuart Kaplan himself, by the way, is amazing, kind, wonderful, and a lovely soul. I was over the moon that he not only knew about Holistic Tarot, but had generous praise for my work.

Anyway, they want to buy a license to my keywords to create the deck concept I had come up with, but of course, do it in their much more professional and expert way than the amateur thing I had put out. Wow! Yeah, that’d be so neat!

I explained that I had granted all of my work to the public domain already, so technically they could go ahead and create the same exact keywords and reversals deck without needing to ask for my permission, and I would be totally okay with that, no license or anything needed. I had made it free so that anyone could. Yet they insisted on working with me anyway and getting it licensed. They wanted my backing and name behind the keywords. Well. Cool! I’m totally in! We chatted and a letter of interest was sent to me within a few hours.

I’m happy to announce to all of you who liked that deck concept that a much nicer one– a professionally done up one, not my rinky-dink one– will be produced by U.S. Games with my keywords. Furthermore, they’ve hired me to help write a little white booklet (LWB) to go along with this deck. But now, instead of my makeshift graphic design work on the deck images, you get the benefit of professional artists and graphic designers at U.S. Games. It’s a win-win for everybody all around.

You all know the amazing quality work U.S. Games puts out, so now there will be no more worrying about which cardstock you should use, or which card  back design I personally like the most and would recommend you use (true story–I got emails asking that), or how to print, and there won’t be the typos or alignment errors that were in my amateur deck (thank you to all those who were attentive enough to point these errors out to me). U.S. Games saved my day by taking on all the fuss that I wasn’t prepared or equipped to handle on my own.

This is an exciting collaboration project and I’m glad that the keywords-reversals study deck is getting produced by a veteran deck publisher like U.S. Games, who you know I love because I’ve been doing tons of reviews of their decks over the years.

This is not only going to be an incredible deck for beginner students or those who want to study the RWS system, but it’s also going to be a great go-to deck for those who aren’t necessarily in the tarot world but want to dabble with tarot to help them navigate some of life’s questions. My foot in the mainstream professional world and also in the mainstream creative community tells me this sort of deck is going to be just the deck a lot of people have been wanting– it’s tarot, yet also incorporates keywords as part of the divination to trigger your intuition, so it’s also part oracle.

Now, it’s mostly, and primarily, their project, since I want them to take the lead on this. I am not a deck creator and don’t want to get into deck creating. I am not the one in charge. They’re licensing my selection of keywords and in addition, I’ve been hired to help them write a little white booklet to go along with the deck, so my involvement is only on the verbal-writing side, which is exactly what I want. Everything else will be in the good hands of their creative design experts and tarot deck professionals.

For me, this is in so many ways a dream come true. My idea and concept stays alive in the universe and gets improved upon and polished by an incredible publisher. I don’t have to handle any of the nitty gritty that I really dislike handling (and out of nowhere got swamped with handling when I released the free version, which had me at my wit’s end). All the parts of deck creating that I know nothing about and stink at doing myself is now going to get handled by experts. It’s incredible. I’m about to get religious and announce my faith in higher powers.

Stay tuned. You’ll be hearing more about this cool deck from U.S. Games and me. So those of you who want the RWS keywords and reversals study deck, it’s coming!

28 thoughts on “Coming Soon: An RWS Keywords and Reversals Deck from U.S. Games”