The Deck of the Bastard Tarot is a self-published tarot deck by Seven Stars and you’re going to love it. You can purchase it through Etsy or at the proprietor’s website, Tarot by Seven. It’s a “bastardization” (her words, not mine) of several traditional decks– you’ve got Etteilla, Grande Jeu, Soprafino, Rider-Waite-Smith, and I swear I see Sola Busca influences in there, too. The design of the deck conveys a vintage feel, and I love that. Artwork wise, it’s a blending of many traditions, but you would read it the way you read RWS. This deck is fantastic to whip out during public readings, and is quite easy to read with for any RWS reader.

I’ve already decided that this deck has become one of my go-to “workhorse” tarot decks (terminology I’ve stolen from Jenna Matlin over at Queen of Wands Tarot). Really. It’s up there with the Golden Universal for professional reading decks. I don’t think this is an ideal deck for beginners on the RWS system, however, as it may get confusing at that stage of learning (even though the version with the keywords would make an excellent gift to a beginner), but intermediate and onward, you’re going to love reading with the Deck of the Bastard. I think it’s a great deck for pro readings.

So I’m going to start with the negatives, and admittedly, all my “negatives” are very, very superficial gripes. The packaging left a lot to be desired. It came in just its brown cardboard shipping box and inside the box, not one bit of packing material was included to cushion the deck, and then there was just this deck, plastic-wrapped. No card, no booklet, no box, no drawstring baggie, no invoice, nothing. So that kind of left me scratching my head a bit, especially after recent purchase experiences with other self-published deck creators, who included personalized notes, freebies, or at least a little white booklet that explains the deck’s heritage.

The cards are 2.75″ x 4.75″ and have a Lo Scarabeo cardstock quality feel to it. They shuffle great in your hands and they fan out just beautifully. There’s no glossy laminate, and you know I love my matte finishes.

The proprietor does allow you to customize your tarot backs for an additional $12, but the deck itself was already $68, so at the last minute I decided against the customized back. I regret my decision now. Although that’s also in part why this deck has become one of my workhorse professional reading decks. The whole spider motif won’t bother me when I’m reading for others, especially since I’m blind and can barely see the dying fly, so it’s all good. But as a personal deck, no.

You can, however, order your deck captions customized, and that part is included in the price, which I thought was really cool. The deck comes with blank borders, titles only at the bottom, or titles and keywords.

I don’t know why I selected titles and keywords. I think the stingy-Asian in me took over and I thought, “I am getting more for my money” or something, I don’t know, but it was a stupid idea on my part. In retrospect, I would have much preferred either the blank borders or just the titles only.

Okay, negative critiques over. Here is where I gush. I love this deck. I love its vibe, the Old World feel, and it reads just fantastically. Yes, you’re going to see a bit of an artistic discrepancy (obviously) between the Majors and Minors, especially when you get into the Rider-Waite-Smith imagery in the Minors, but that didn’t bother me.

You get the best of many worlds. You get the benefit of the older trumps and you get the benefit of Waite and Smith’s easy to read imagery in the Minors. She changed up some of the coin faces in the pentacles for the suit of Pentacles and that was really cool. You’ll also note that the Majors follow the Rider-Waite-Smith numbering system, with Key 8 being Strength and Key 11 being Justice.

I love the court cards she’s chosen in lieu of the RWS courts. Yet keeping the RWS for the pips was a really great idea, or at least those who read with the RWS system are going to think it was a really great idea. It also looks like she’s touched up some of the cards, like the sky in the Five of Cups you see above. I don’t think the original had those dark clouds, but her addition is nice.

For me, the mixing of different time periods and different art styles worked. I read well with this deck and it’s very impressive looking to clients. I love the slight discolorations, which are intentional, to give it that vintage feel. Look at the Three of Swords, Five of Swords, or Seven of Swords. They look fantastic.

I ordered “Option 2,” the version with both titles and keywords. I don’t know why I did that. Again, I think I thought I was getting more for my money. I’m a dork. However, I do see the value of having the keywords. It turns this deck into a great one to gift to beginner tarot learners. The blank version would have also been nice. I didn’t realize how easy it would be to read with this deck. If you’re even somewhat proficient at tarot, you don’t need the titles or keywords. All the cards are easy to recognize.

Some of the keywords were intriguing to me and compelled me to look at the cards from a different perspective. The Page of Cups upright, for example, has the keyword “Synchronicity.” In reverse, you’ll “Emotional Imaturity” [sp, with the one “m”]. The Page of Swords reversed is “All talk no action.” I love that. The Seven of Swords upright is “Resourcefulness.” In reverse, it’s “Outsmarted.” The Ace of Cups upright is “Overwhelming Emotion.” In reverse, it’s “Repressed Emotions.” The Queen of Wands in reverse is “Shrinking Violet / Demanding.”

Interestingly, the deck comes with two different World cards. I prefer the one with the ouroboros and the man with the club at the center, but love that I get options. 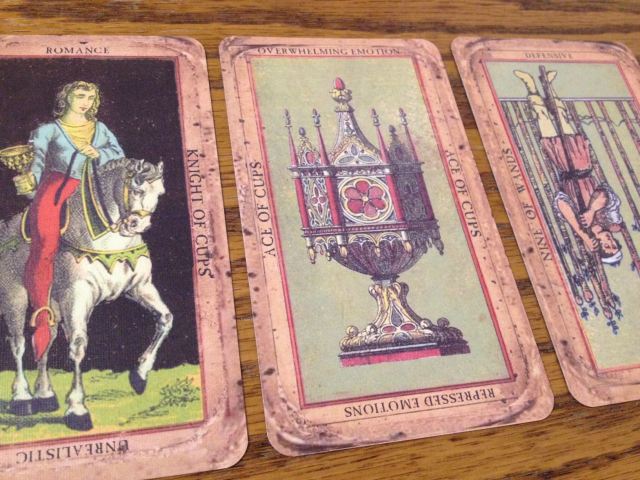 For what you get, I found the price tag a bit steep, and hope that the creator will find a more economical press to go with in the future for printing these cards and reduce the price. Again, you may like the card backs, but I just wasn’t feeling the design.

Overall, the Deck of the Bastard Tarot is amazing and I love these cards so much. Like I said. They’re officially one of my go-to workhorse reading decks now. The version with the keywords is a great beginner’s deck to gift to someone while the other two versions are going to be gratefully received by tarot practitioners of all levels. I think it’s a splendid deck for professionals to whip out and so I highly recommend. Seven Stars has done something quite wonderful here.

5 thoughts on “The Deck of the Bastard Tarot: Review”