It’s perplexing that I would take so long to acquire the Mary-el Tarot but it did, just over 2 years from its publication date (February, 2012) by Schiffer Publishing. Now that I have it, I’m even more perplexed at myself for the delay. I’ve been hearing about it here and there, reading reviews, seeing vlogs about it, and even articles in various tarot publications. 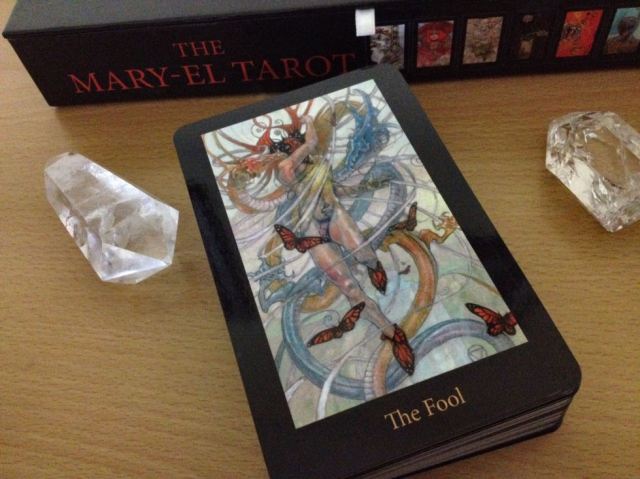 The card dimensions are 3.36″ x 5.5″ so they are a touch on the large side, but good thing, because I want to see the artwork. The one thing I dislike is the finish. It’s glossy and laminated, which I don’t like in tarot cards.

It’s also an unusually thick card stock, rendering it difficult to shuffle. For that reason, I wouldn’t use Mary-el for professional or public readings. This is going to be one of those decks I won’t want others touching.

Though there is notable influence from all three of the main tarot traditions (Marseille, RWS, and Thoth), the Mary-el tarot is very Thoth, except it’s better than the Thoth tarot.

The backs are these reversible twin ouroboros (what’s the plural form for that?) in the shape of a lemniscate. Just beautiful. I love also how the Majors convey through the imagery a sense of the governing elemental dignities. For Key 20: Judgment (or Judgement… as we Americans using the Rider Waite have had to get used to), there’s a divide in tradition. Some associate Key 20 with Fire, like I’m guessing Marie White does given the imagery of that card, and some associate it with Water. I happen to associate it with Water usually, though when using the Mary-el, it’ll be Fire.

I don’t think I’ve ever appreciated a depiction of the Queen of Swords as much as I do Marie White’s. Lately in my life I’ve been seeing a lot of black crows, which is interesting synchronicity here. Black crows convey metaphysical mystery, the esoteric, alchemy, transformative magic, intelligence, and even a touch of mordacity, which works very well with the general sentiments (or lack thereof) of the Queen of Swords. I love the duality of one crow with a beak open and another beak closed, sharing a single all-seeing green eye, the same green of my beloved kitty’s eyes (I share residence with a ginger and white cat who has the same color green eyes). I love the winding stream into the horizon, what’s there hidden from view.

The card as a signifier is just very me. All the imagery on the Mary-el tarot work wonders for bridging the consciousness with the collective unconscious. It draws you in, tunes out what you think you know from the memories in your consciousness, and you begin a journey first into the subconscious and then, slowly, further, into a world visible only through intuition. You’ll definitely be reading intuitively with this deck.

The accompanying book is worth reading cover to cover, and not so much for card meanings like typical little white books (LWBs), but for the poetry, quotes, philosophy, and provocative information White has provided. Temperance is another one of my favorite cards.

The thick card stock means that the deck is more than a handful, especially for me. I don’t have very big hands. Usually this is where I start to gripe about the tarot deck I’m reviewing, but here, it works for the Mary-el.

It forces me to take time shuffling, to shuffle slowly, and to meditate and reflect during the shuffling process itself. With the Mary-el you’ll want to slow down every aspect of the reading process.

On the left above is the thickness of the Mary-el tarot. On the right is a typical size RWS-based deck, the Golden Universal.

And here you see why I don’t like laminated cards. The above is bound to happen, where part of the laminate coating unsticks from the card stock.

The Mary-el is now my personal reading deck. When I read for myself, this is the deck I reach for. I don’t use it for professional readings, however. The deck has a very particularized methodology.

It draws you into the collective unconscious via your own personal subconscious terrain, and so for me at least, it’s important that it’s used for your own readings, by you.

The companion guidebook that White provides is incredible. She deep-dives into each card illustration and lucidly explains the gears of the engine that drives each key. You’ll find strong Qabalistic influences in her design, astrology in the courts, Rosicrucianism, and Hermetic philosophy.

I say get this deck because the imagery pushes your intuitive training forward. For intuitive development, for what I think some folks refer to as “shadow work” (we practitioners of East Asian heritage have an altogether different word and concept for it), and to explore the parts of your own mind you have yet to explore, use this deck. It’s highly effective. 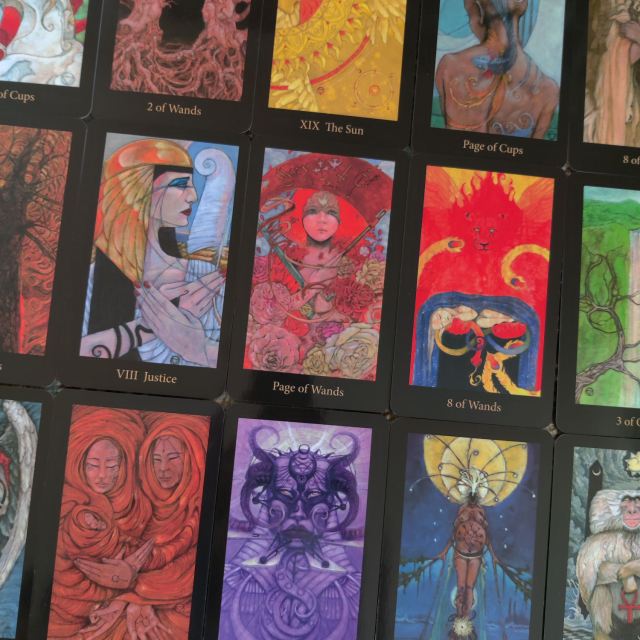 14 thoughts on “The Mary-el Tarot: My Personal Reading Deck”